Financial ETFs Trip Early, Then Dust Themselves Off

Beginning late last week, financial exchange traded funds (ETFs) had a nice ride. This morning, it appeared the good times were about to stop, but after Treasury Secretary Henry Paulson pushed Congress to quickly approve a plan that would support Fannie Mae and Freddie Mac, the funds righted themselves, reports Martin Crutsinger for the Associated Press.

A rescue of the mortgage giants could cost as much as $25 billion, according to the top budget analyst in Congress.

It wasn’t looking so good earlier in the day. Wachovia (WB) delivered an earnings report that exceeded estimates, but in the other, less positive direction. The bank lost $8.9 billion, then announced it was slashing its dividend and eliminating jobs, reports Ieva m. Augustums for the Associated Press.

It’s quite a shift, as Wachovia earlier this month predicted a $2.6 billion to $2.8 billion quarterly loss. Much of Wachovia’s pain is being felt because of its 2006 acquisition of a California mortgage lender known for exotic loans.

American Express (AXP) also withdrew its 2008 forecast, saying the business climate was “much weaker,” reports Hugh Son for Bloomberg. The U.S. economic slowed down has spread to even American Express’s wealthiest cardholders. Their second-quarter profits dropped 37%.

Among the financial ETFs trading higher today are: 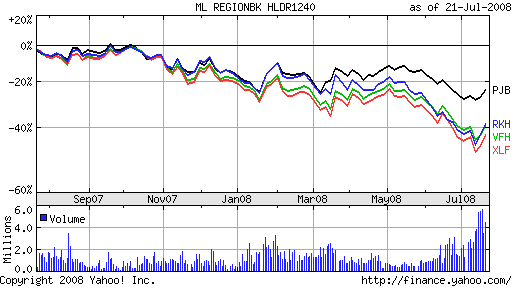