Currency in emerging markets have enjoyed a five-year winning streak that has benefited some exchange traded funds (ETFs). But the good times might be coming to a halt.

Inflation is what’s doing the money in, and it’s a problem everywhere from South Korea to Turkey, report Lukanyo Mnyanda and Lester Pimentel for Bloomberg. The currencies for 26 developing countries tracked by Bloomberg returned an average of 0.92% in the last three months, compared with 1.6% in the first quarter and 8.2% for 2007. They’ve been returning 30% annually since 2003.

But for the first time in seven years, investors are less bullish on the emerging markets than they are on U.S. equities, according to a recent Merrill Lynch survey. Food and energy prices have accounted for more than 40% of inflation in India, Thailand and Turkey – compared with 25% in the United States.

Among the ETFs that could be affected if this slowdown sticks include: 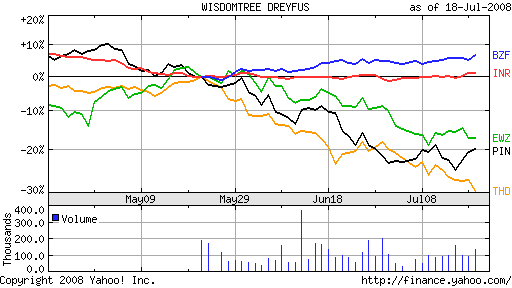