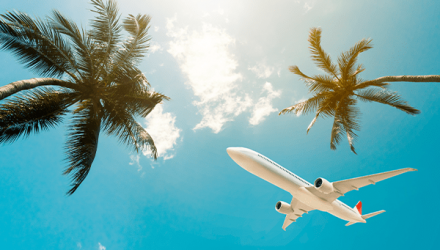 With Summer Upon Us, These Are My Top 3 Airline Stock Picks

Summer is upon us, and traditionally that’s when families pack their bags and get away for a well-deserved vacation. Since this is the first summer travel season in three years that feels like the before times, airlines and airports are bracing for what is expected to be a particularly busy three months.

At least a couple of airlines, in fact, upgraded their second-quarter revenue projections last week, citing higher-than-expected demand. On Thursday, Southwest Airlines said it expected revenues from April to June to increase 12% to 15% from the same quarter in 2019, up from earlier projections of 8% to 12%. That comes despite higher fuel prices, which should be “more than offset” by increased revenues.

Based on current trends, Southwest “expects solid profits and operating margins” in the second quarter and for all of 2022, the Dallas-based carrier said in an investor update.

JetBlue Airways similarly announced last Thursday that bookings continue to “exceed expectations” and that the carrier may be on track to collect record revenues this summer. JetBlue expects “June revenue per available seat mile to be up more than 20%” compared to the same month in 2019.

As you may know, JetBlue is still trying to outbid Frontier Airlines in an effort to acquire rival low-cost carrier Spirit Airlines, even though Spirit has already agreed to merge with Frontier. This should tell you that airlines are scrambling to gobble up as much market share as possible ahead of an anticipated leisure travel boom.

I’m very pleased with how well airline stocks have performed so far this year relative to the market. The Dow Jones U.S. Airlines Index was up more than 3% year-to-date through Friday of last week. Although the STOXX Europe Total Market Airlines Index was down 8% over the same period, that was still ahead of the S&P 500, which has sold off largely on inflation concerns.

That said, below are three airline stocks I’m keeping my eye on as we head into the busy summer leisure travel season.

I’ll just say up front, Southwest has long been one of my favorite domestic carriers. As the original low-cost, no-frills airliner, it’s had decades’ worth of experience operating at the intersection of comfort and affordability.

There’s much more to love about Southwest than what I’ve already mentioned. The company has the number one position in 23 of the top 50 markets in the U.S., and the focus right now is on restoring the network to pre-pandemic levels—something that could be achieved by 2023, if not sooner.

Southwest is also focused on maintaining its low-cost advantage. This includes coming up with more efficient flight plans, optimizing maintenance planning and modernizing its revenue management system. In December 2021, the company signed a new credit card co-brand agreement with Chase until 2030, which is already very lucrative. All combined, these initiatives are expected to add between $1.0 billion and $1.5 billion to earnings before interest and taxes (EBIT) by 2023.

Rising jet fuel prices are a concern, but the good news is that Southwest is approximately 64% hedged for the rest of this year at around $60 per barrel. This puts the company in a better position than many of its larger peers, including American Airlines, United Airlines and Delta Air Lines, which are currently unhedged.

The more I learn about Alaska, the more I find it attractive. Right now, the company appears to have the best balance sheet in the industry with a 49% debt-to-capitalization ratio. Since the start of the pandemic, Alaska was the first airline to reach no cash burn, the first to become cash flow positive and the first to become profitable.

As the number five U.S. carrier by fleet size and passenger numbers, Alaska is moving toward a low-cost structure that should match Southwest’s by the end of this year or next. The airline has regularly outperformed the domestic industry on operating margin over the past 20 years.

Unlike other airliners, Alaska is working toward having a single-type fleet, which should lead to millions in cost savings in aircraft swaps, maintenance and reduced pilot training. For mainline operations, Alaska will use the Boeing 737, while the Embraer will be used for regional operations. These initiatives are expected to more than offset higher labor costs and airport costs.

Similar to Southwest, Alaska hedges its fuel costs. Half of its fuel requirements are hedged until the end of this year at a cost of $71 per barrel.

In 2016, Alaska merged with Virgin America with the goal of becoming the premiere West Coast carrier. Today its market share in key hubs continues to rise, including in Seattle, Portland, Anchorage, San Francisco and Los Angeles. About 50% of its loyalty participants are in the Pacific Northwest.

Now for something a little different, let’s jump across the Atlantic to Ireland, where ultra-low-cost carrier Ryanair is headquartered. The largest airline in Europe, with flights to nearly 40 destination countries, Ryanair is well-positioned to capture an increase in leisure travel demand as Europe drops its Covid-related measures and restrictions.

To give you an idea of just how busy Europe may be this summer, the European airspace manager EUROCONTROL recently said it expects traffic in the upcoming months to stand at 90% of pre-pandemic levels. This could be a huge boon for Ryanair, which reported an average of 2,815 flights per day in April.

Ryanair has been a leader in attracting climate-conscious customers, something that’s increasingly important in the European market. In June of last year, the company took delivery of the Boeing 737-8200 “Gamechanger” aircraft, which purports to reduce fuel consumption by 16% per seat. As of March 2022, Ryanair has taken delivery of 61 of these aircraft and reportedly plans to increase this by an additional 70 within the year.

Originally published by U.S. Global Investors on 31 May 2022.

The Dow Jones U.S. Airlines Index measures the performance of the portion of the airline industry which is listed in the U.S. equity market. Component companies primarily provide passenger air transport. Airports and airplane manufacturers are not included. The STOXX Europe Total Market Airlines Index tracks the performance of shares of listed airlines in Europe. The S&P 500 Stock Index is a widely recognized capitalization-weighted index of 500 common stock prices in U.S. companies.