You are at:Home»Investing»Why Russia Is Defying All Expectations Hosting the World Cup 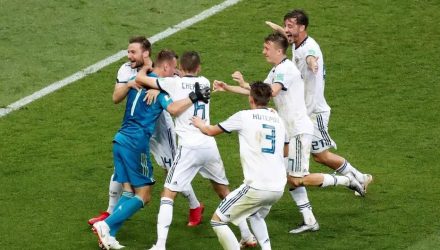 Why Russia Is Defying All Expectations Hosting the World Cup

Russia has surprised experts and fans alike. Expectations were low at best. Because of recent setbacks, including a disastrous performance at the 2016 UEFA European Championship and injuries sustained by key players, the federation ranked a dismal 66th place among Fédération Internationale de Football Association teams—its lowest position ever. The only reason it didn’t have to qualify to compete was because Russia is the host nation. (This is the first time in its 88-year history, by the way, that the World Cup has been held in Eastern Europe.)

And yet Russia has defied predictions that the federation would be eliminated right out of the gate.

Russian Airports Could Be Biggest Beneficiaries of Hosting World Cup

This is the second time in the past five years that Russia has hosted a major international sports tournament, and questions have surfaced about what economic benefits, if any, doing so affords.

As I shared with you back in February, the Eastern European country spent as much as $50 billion, a record-breaking sum, to host the 2014 Winter Olympics in Sochi. It seems insurmountable, but Fitch Ratings concluded that the debt was “manageable,” citing the reduction of interest rates to 0.5 percent and noting that the cost is less than 2.5 percent of Russia’s gross domestic product (GDP).