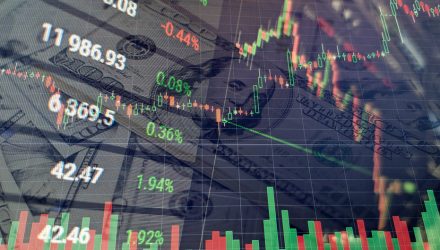 While observers have been warning of an imminent economic recession that could drag down the markets, the CBOE Volatility Index, or VIX, and related exchange traded funds remain relative lax, reflecting ongoing complacency in equities.

The so-called fear gauge or VIX is an options-based indicator that shows the demand for protection against a sudden pullback in the S&P 500, but the volatility indicator has been retreating in response to a rebound in the stock market, with the S&P 500 up 12% since mid-June lows.

VIX readings above 20, such as what we are experiencing now, reflect a heightened sense of fear over the short-term outlook, but it is still nowhere near the readings above 35 earlier in the year or the spike up to 85 during the height of the COVID-19 pandemic. Nevertheless, the VIX remains above its long-term median range of 17.7, indicating ongoing concerns for the market outlook.

“There is just less of a concern of an outlier kind of move in the market,” Chris Murphy, co-head of derivatives strategy at Susquehanna International Group, told Reuters.

Some market observers, though, have warned that the recent rebound in stocks may be short-lived, with further downside risks ahead.

“We view this as a bear market rally,” Savita Subramanian, equity and quant strategist at BofA Global Research, said in a report, pointing out that such instances have occurred an average of 1.5 times per bear market since 1929.

Others have argued that the VIX may be relatively subdued since many investors are sitting on cash, so the need to hedge against their risk exposure has diminished.

“Institutional positioning in equities is at the low end of its historical range,” Anand Omprakash, head of derivatives and quantitative strategy at Elevation Securities, told Reuters. “You have a situation where the catalyst for an explosive equity crash is not as prevalent as it might have been in the past.”

“Because of how clean positioning has become through the year… You are not having the impact from everyone running for the exit at once,” Grinacoff told Reuters.