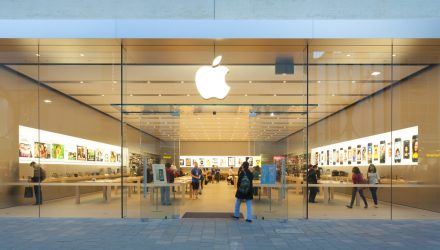 U.S. markets and stock ETFs turned lower Friday as traders feared the economy will take longer to recover following Apple’s decision to close some stores in states that saw a spike in coronavirus cases.

U.S. equities gave up early morning gains after Apple stated it was closing 11 stores in Florida, Arizona, North Carolina, and South Carolina in response to the rise in COVID-19 infections, the Wall Street Journal reports. Nevertheless, all three major benchmarks were set for a weekly gain as aggressive stimulus measures and cautious optimism over the economic recovery helped fuel market momentum.

However, fears of a second wave of infections and another round of lockdowns threaten the recent market gains, which have been partially supported by optimism over recovering businesses after easing shutdowns measures.

“The things you saw in March—the panic and forced selling—all seem to have faded, so it’s a bit more of a normal market, though a fragile one,” Jonas Golterman, senior markets economist at Capital Economics, told the WSJ. “The ingrained reflex which we have had in the past 10 years is, we have to buy the dip, and that usually works out.”

While new cases in Florida, Arizona, and California have hit daily record highs, there have been no signs of reinstating lockdown measures. As preventative a measure, authorities in California are requiring residents to wear face masks in high-risk settings.

“At the moment, people just seemed very focused on the strength of the recovery, which is to be expected given the strength of the shutdown,” Lyn Graham-Taylor, fixed-income strategist at Rabobank, told the WSJ. “Through the summer, the economic data will be mechanically good just because it’s going off such a low base, so it will take time to find out what the economic scarring is.”

Many investors are now betting that the aggressive stimulus measures from global central banks, including the Federal Reserve, the Bank of England and the European Central Bank, among others, may continue to support the economy and the markets.