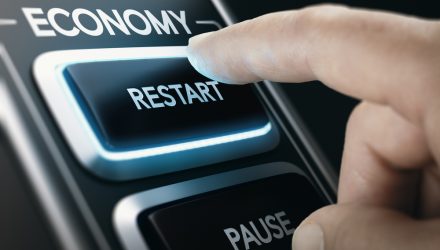 U.S. markets and stock ETFs rallied, with the S&P 500 regaining its 3,000 level, on growing optimism over the reopening economy and hopes for a coronavirus vaccine.

The S&P 500 pushed back above 3,000 for the first time since early March and was trading back above its long-term trend line at the 200-day simple moving average.

Investors gained confidence in signs of economic activity picking up faster than expected across the U.S. and around the world as global economies roll back shutdown measures and look to reactivating stagnate business activity. For instance, restaurant reservations and spending on hotels and airlines are resuming in the U.S. as the daily number of new infections helps ease consumer concerns, the Wall Street Journal reports.

Peter Boockvar, chief investment officer at Bleakley Advisory Group, noted that equities have regained a level of excitement typically seen during a market top, adding that traders are looking only at the direction of the stock recovery but bonds are more concerned with the degree of the recovery.

“As long as things are reopening, the economic data don’t matter,” Boockvar told the WSJ.

California, which had one of the country’s most restrictive measures, began allowing retail businesses to offer in-store shopping and places of worship to reopen, Reuters reports.

“There’s more optimism about the vaccines and all the 50 states have reopened to various degrees,” leading to optimism that the U.S. economy would improve, John Praveen, portfolio manager at QMA, a PGIM company, told Reuters.

However, markets took a dip toward the end of the session on Tuesday after White House adviser Larry Kudlow said President Donald Trump was “so miffed with China on the virus and other matters that the trade deal is not as important to him as it once was,” rekindling to trade war fears that previously dragged on the market.