You are at:Home»Featured»Turkey ETF Strengthens as Tensions Thaw with U.S. 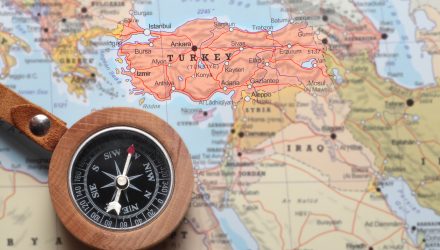 “We had no deal with Turkey,” President Donald Trump told reporters at the White House. “I feel much differently about Turkey today than I felt about them two days ago. I have a very good feeling toward Turkey — two days ago, I did not.”

Pastor Brunson was released on Friday and potentially opened up the possibility that the Trump administration could remove sanctions placed on Turkey.

“The lira is likely to benefit at least modestly during the period between now and the CBT meeting of 25 October where we anticipate the next 300 bps rate hike,” ING analysts wrote in a note, according to Reuters. “This geopolitical story was at best a distraction – the real issue about the lira is the lack of inflation targeting by the central bank.”

inance Minister Berat Albayrak said Turkey’s inflation, which touched a 15-year high in September, could enter a downward trend for the rest of the year, Reuters reports, Reuters reports. Albayrak also said Turkey’s economy will push through its high inflation and interest rates with measures the government has taken to combat surging consumer prices.