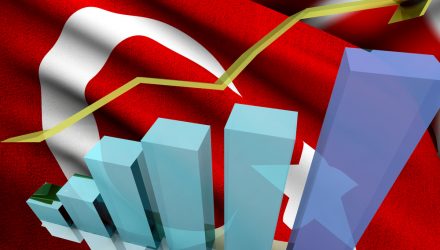 A Turkey country-specific exchange traded fund has been rallying as foreign investors become more risk-tolerant and look for cheap areas of the emerging markets.

Since the late-October lows, the iShares MSCI Turkey ETF (NasdaqGM: TUR) increased by 57.1%. Over the past three months, TUR advanced 40.1%, whereas the broader iShares Core MSCI Emerging Markets ETF (NYSEArca: IEMG) was 20.1% higher.

The Turkish lira has hit its highest level against the U.S. dollar in four months as foreign investors flocked back to the country’s markets in response to the central bank’s steps to reign hyperinflation with higher interest rates, the Wall Street Journal reports.

According to Turkey’s central bank, investors added $1.4 billion to local equities and $2.5 billion to local bonds in the ending two months of 2020 after pulling over $13 billion in stocks and bonds through the first 10 months of the year data.

Investors have broadly returned to the emerging markets on expectations that the economies hardest hit by the coronavirus pandemic Covid-19 will make a strong rebound as the global vaccine is dispersed.

Turkey’s lira has been strengthening from the record lows in 2020 after Turkey’s central bank hiked interest rates in its past two meetings and reassured investors it was committed to rebuilding reserves and controlling the high inflation.

“Yields are very high, and you can still get very high returns,” Kieran Curtis, an emerging-markets fund manager at Aberdeen Standard Investments, told the WSJ, adding they have shifted into short-duration, lira-denominated debt because of recent rate rises.