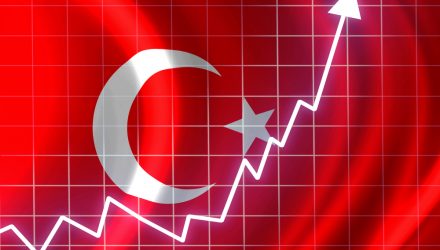 A Turkey country-specific exchange traded fund plunged Thursday as the Turkish lira spirals to a record low on rising expectations that the Central Bank of Turkey will have to hike rates to support the currency.

Dragging on the Turkish markets, the lira currency deprecated as much as 3% on Thursday, its biggest single-day decline since March 2019, and it has lost 18% of its value this year, the Wall Street Journal reports.

Turkey has already committed billions of dollars to support the flagging lira after emerging market currencies were dumped in response to the risk-off coronavirus selling earlier in the year. While some emerging market countries allowed their currencies to weaken, Turkey’s central bank borrowed foreign currencies from domestic banks and soled those into the market to purchase the lira. Goldman Sachs estimated that Turkey spent $65 billion this year managing its currency as of the end of June.

“Clearly, the foreign-exchange intervention has failed. They are looking to conserve reserves,” Timothy Ash, senior sovereign strategist covering emerging markets at BlueBay Asset Management, told the WSJ. “They’re looking to see where the currency goes and where it stabilizes.”

The emerging market has tried to bolster its local currency on concerns that a weak lira would drive up the cost of imports and fuel inflation, which was at 11.76% year-over-year in July.

However, the rising imports come at a time when the country is losing out on dollars and euros that would normally come in through tourism and a slump in exports due to the ongoing Covid-19 pandemic. This has further widened the gap between imports and exports, distending the country’s current-account deficiency and worsening its need for foreign currencies.

Looking ahead, analysts increasingly anticipate Turkey’s central bank, which cut rates to 8.25% by May from 12% at the end of last year, will have to roll back those cuts. Goldman Sachs projects rates will be hiked to 10% by the end of the year and to 14% by the end of 2021.