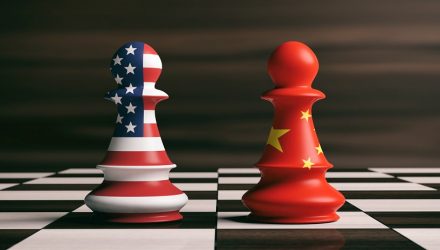 U.s. stocks have been on the decline on Tuesday following two days of fresh all-time highs after President Trump issued words of caution on China trade talks, paring some gains from prior days.

President Donald Trump said Tuesday that there’s still a long way to go to reach a deal with China, threatening to slap tariffs on another $325 billion of Chinese goods.

With the markets having a record June recovery, after a brutal May selloff, the Dow scored its best June since 1938 when it gained 24.26%, while the S&P hit its best June since 1955 when it gained 8.23%. This meteoric rise, in conjunction with the Fed expressing the willingness to cut interest rates if necessary, offers the President little motivation to make any trade deal that is less than ideal.

Meanwhile, China out of nowhere added a new member to its negotiating team, commerce minister and hard-liner Zhong Shan, who was present at last month’s G-20 summit, and participated in a telephone conversation with U.S. representatives last week.

“The U.S. side has provoked economic and trade frictions against us and violated the principles of the WTO. It is typical of unilateralism and protectionism,” Zhong told the People’s Daily on Monday, according to a Google translation. “We have to uphold our warrior spirit in firmly defending national and people’s interests in defending the multilateral trading system.” The People’s Daily is the official newspaper of the Communist Party in China.

After what seemed to be significant progress, following the G20 meeting, investors are now getting spooked by the lack of progress.

“No face-to-face meetings have even been scheduled,” Donald Straszheim, head of Evercore ISI’s China research team, said in a note. “Trade progress has been in reverse. The two sides are further apart now than in Nov-Dec 2018.”

“A combination of substantial steps, partial actions and empty words which will be a relief but far from a final resolution of what has morphed from trade war to a ‘stop the China rise’ cold war,” Straszheim said.
Despite stock losses today, Trump claims that Data on released on Monday showing China’s economic growth slowed to 6.2% in the second quarter, is evidence the U.S. is victorious in the trade war.

China’s 2nd Quarter growth is the slowest it has been in more than 27 years. The United States Tariffs are having a major effect on companies wanting to leave China for non-tariffed countries. Thousands of companies are leaving. This is why China wants to make a deal….

With a slight pullback today, investors looking to dip their feet into the market could look into broad market ETFs like the Vanguard Total Stock Market ETF (VTI).
For more investing ideas, visit ETFtrends.com.