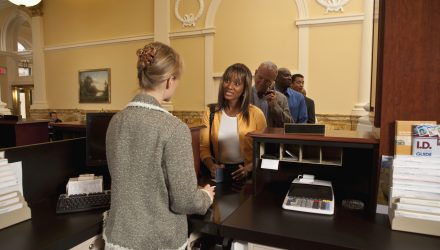 Traders Take Another Look at a Regional Bank ETF

The SPDR S&P Regional Banking ETF (NYSEArca: KRE), the largest regional bank ETF, is up nearly 3% to start 2018 and some options traders are taking another look at the popular fund.

KRE “started the month trading near its Jan. 24 record high of $63.81, before pulling back with the broader equities market. KRE found a foothold atop its 80-day moving average, though, which also provided support back in June and November,” reports Schaeffer’s Investment Research.

“It looks like one options trader is betting on KRE to take an even bigger bounce. Of the more than 26,000 call options on the tape so far, nearly 61% has centered at the June 65 strike — due to a 16,000-contract block that was likely bought to open for roughly $2.41 million (number of contracts * $1.51 premium paid * 100 shares per contract). Trade-Alert indicates this likely builds on a similar position initiated last Friday, and reflects a bullish outlook for KRE over the next four months,” according to Schaeffer’s.

Risk-tolerant traders who want capitalize on the short-term volatility have a number of leveraged and inverse ETF options to enhance potential returns. For instance, the Direxion Daily Regional Banks 3x Bull Shares (NYSEArca: DPST) can capitalize on short-term views on further strength in the financial sector, or the Direxion Daily Regional Banks 3x Bear Shares (NYSEArca: WDRW) can express short-term hedge of the opposite.