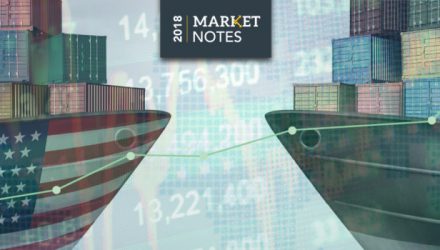 International economic data was similarly mixed for the week. Both Chinese and European manufacturing PMI was better than expected, as was capital spending in Japan. However, disappointing results were seen in Brazil’s GDP, Japan’s industrial production and Russia’s manufacturing PMI.

In the domestic equity markets, technology stocks outperformed other sectors. Investors continue to be attracted to the sector’s relatively strong growth and its relatively low sensitivity to changes in interest rates. In contrast, industrials and materials stocks lagged due to concerns that economic growth may not be as robust as expected this year if the Federal Reserve aggressively raises interest rates.

In the fixed-income markets, long-duration Treasuries outperformed as interest rates moderated. International bonds underperformed, however, as the dollar strengthened.

Stocks fell sharply last week, driven mainly by investors’ concerns that tariffs on steel and aluminum imports announced by the Trump administration could lead to a trade war that hurts the economy. Small-cap stocks held up relatively well, as smaller firms typically generate less revenue from outside of the U.S. than do larger firms.

Bond prices rose slightly for the week as nervous investors flocked to the perceived relative safety of fixed-income. For example, the 10-year Treasury note yield fell 6.7 basis points on Thursday alone—it’s largest one-day decline since September 2017. (Bond yields fall as bond prices rise.) However, bonds gave up much of those gains late in the week as investors worried that a trade war could cause inflation to spike—a negative development for bond markets.

The portfolios remain fully invested with overweight allocations to emerging markets and large-cap growth. Our credit positioning was split for the week, with high-yield bonds dropping and preferred stocks actually moving higher. We will closely monitor the markets for signs of increased negative sentiment.

The CBOE Volatility Index (VIX) and other measures of expected market volatility rose last week as global equity markets sold off significantly. However, we did not detect the type of forced-selling market environment that characterized the downturn in early February.

Risk Assist portfolios continue to be 10% to 20% de-risked, with most about equidistant between continuing to de-risk and getting fully back into the respective portfolio’s default equity market allocation. Earlier this month, we increased our re-risk (“get back in”) thresholds to minimize whipsaw market conditions—an action that generally kept the portfolios from re-entering the market prior to this week’s losses.

Bonds outpaced stocks last week as news of impending trade tariffs spooked equity investors. That said, stocks continued to outperform bonds so far this year and the one-year spread between the performance of stocks and the performance of bonds is around 16%.

Key inflation data was released last week: Core PCE rose 1.5% in January on a year-over-year basis—in line with estimates and flat with December’s result. While not as widely known as CPI, PCE is the preferred inflation gauge among members of the Federal Reserve Board, who set monetary policy based in part on inflation data. PCE may more accurately reflect increases in prices paid by households, and is a direct component of consumption data that is used to determine GDP.

Meanwhile, personal incomes rose at their fastest pace on a year-over-year basis since late 2015.

Neither of these results indicated that inflation was heating up, however, and market expectations for inflation remained stable.