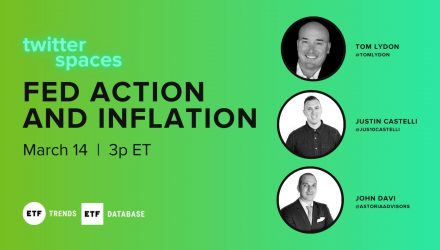 On a recent Twitter Spaces event, ETF Trends’ CEO Tom Lydon was joined by RLS founder and financial advisor Justin Castelli, and John Davi, founder and CEO at Astoria Portfolio Advisors, to discuss what to expect from this week’s Fed meeting in regards to possible rising rates, as well as what advisors are saying about alternatives and how to position their portfolios.

For Castelli, his clients have remained relatively calm through what’s happening. He’s prepped them for volatility in the market through various conversations about having a long-term plan and a financial plan to go with it. He adds, however, “Depending on what happens this week with the Fed and the markets, there may be some new questions that come sooner rather than later.”

From his perspective, there does seem to be a difference between many of the headlines out there versus clients who know what a diversified portfolio is really doing. It’s one thing to note the scary things about the Nasdaq being down a lot, but an 80/20 or 70/30 portfolio operating as needed won’t garner as much attention.

Additionally, while holding off from deeper proactive market commentary, Castelli does note how he reminds clients of the tactical strategy he has, particularly for retirees who can know that things could become more conservative as it goes.

“There’s not a right answer to how much you communicate, but I also think the precedent that you set in the past is what you should continue going forward,” Castelli adds when considering how he’s kept his clients satisfied with the amount of knowledge they receive.

Looking Out For Fed Action

Speaking of these notions of consistency and long-term planning, Davi expands on all of this by noting how, structurally, the economy is in a period for much higher inflation. The levels for stock and bond portfolios have done pretty poorly this year and looking at the Lehman aggregate bond index; it’s down to 4%, which is on par for the worst return in many decades. “I think we just need to be a little careful,” he adds.

As a slight contrast to Castelli, Davi does see that some clients are showing concerns based on selling pressures. What Astoria would say is to hedge for inflation, as they think structurally, in the years to come, inflation is going to be much higher.

Going into this year, with concerns about inflation and rising rates having now largely switched toward concern over global tension, it’s now a matter of considering whether there should be a concern with Fed action. Davi doesn’t expect many surprises.

“If anything, the Fed is going to lean on the side of more dovishness because they have a precedent of trying to protect normal distribution,” Davi adds.

One thing the Fed could do, as Davi suggests, is not sell bonds as aggressively as they may have originally planned, based on the activity taking place because of the Ukraine invasion. With that in mind, there’s so much pent-up demand based on the perceived subsiding of the pandemic that the rise of oil prices isn’t necessarily preventing people from going on vacations. With a strong consumer base, the best action seems to be increasing allocations toward inflation as the global issues will be ongoing.

Listen to the Entire Conversation with Tom Lydon:

#ICYMI @TomLydon, @AstoriaAdvisors & @jus10castelli discussed Fed action and inflation today during a #TwitterSpaces! Check out the discussion during this replay!https://t.co/S9KZuhxWL9