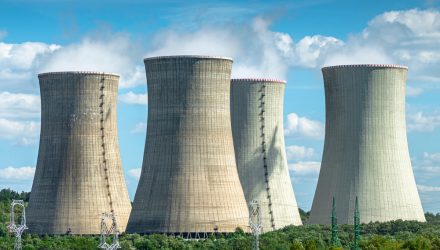 Uranium Prices Could Continue to Soar: An ETF to Play It

Until recently, the thought of using nuclear power never entered serious consideration as an alternate energy source because of its sordid past. Nowadays, with improved technology, it’s re-entered the conversation as a viable alternative with the potential for growth as uranium prices continue to soar.

This year, prices got an added kick following Russia’s invasion of Ukraine, which threatened supply fears. However, higher uranium prices could be an enduring trend rather than an isolated event.

“Experts see uranium prices continuing to rise for the next several years as it has done in the past,” a Financial News Media press release said. “In 2021, the price of Uranium reached the highest levels since 2014, driven by numerous external factors. As a key component of nuclear energy, investors continue to bet on increasing demand for uranium as the world looks towards alternative energies.”

Russia’s invasion is also pushing the U.S. to find ways to up the supply of uranium domestically. U.S. President Joe Biden is already pushing for ways to become less reliant on Russia for its uranium supply.

“The Biden administration is pushing lawmakers to support a $4.3 billion plan to buy enriched uranium directly from domestic producers to wean the US off Russian imports of the nuclear-reactor fuel, according to a person familiar with the matter. Shares of uranium companies surged,” a Bloomberg article said.

An ETF to Consider for Higher Uranium Prices

With its exponential growth potential, uranium prices are an ideal option that could also serve as an inflation hedge amid rising consumer prices. As such, one exchange traded fund (ETF) to consider is the Global X Uranium ETF (URA).