You are at:Home»Thematic Investing Channel»The Protests in Hong Kong Have the Potential to Impact the Global Economy 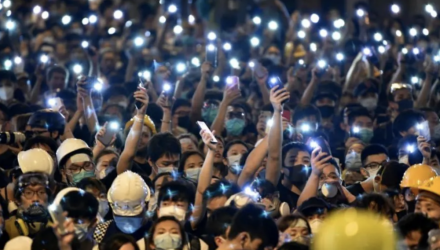 By Joseph Hosler via Iris.xyz.

Though volatility is still hitting the markets, not much has really changed in the economic landscape since our last newsletter. The U.S. is plodding along at a 2.5% – 3% annualized real rate of growth, Britain is still exiting (sometime, somehow), and trade issues continue to be on the minds of many. On the political side, however, a new event has added to the mosaic. The protests in Hong Kong we see today have the potential to impact the global economy.

The protests that have been taking over the city—almost one-third of the population came out to protest—are driven by a proposed new extradition law that would make it much easier for China to extradite individuals back to the mainland. Since the handover of Hong Kong to China in 1997, the city has lived under a “one country, two systems” mode of operation that was to extend into 2047.  The two systems consist of one that respected the rule of law and the other that respected the desires of the communist party.

Through this proposed extradition legislation, the Hong Kong political leadership—widely assumed to be operating with instructions from leadership in Beijing—was taking an early step towards merging the Hong Kong legal system with China’s, causing significant distrust and fear among current residents.

Watching the protests build over the past few weeks has been awe-inspiring. The city last saw significant protesting in 2014, when Beijing tried to exert more control over the region. Like last time, though, it appears that the power of the people will be heard and obeyed, for now. Bravo.