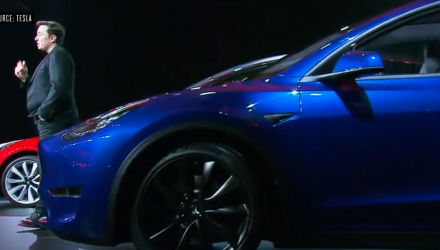 Shares of Tesla fell as much as 5 percent on Friday after the newly-revealed Model Y failed to impress Wall Street during its Thursday night debut at a Los Angeles-based design studio.

“Overall, we found the event somewhat underwhelming with no major surprises,” Deutsche Bank’s Emmaneul Rosner said in a note.

Tesla CEO Elon Musk said the new Model Y will share 75 percent of the same parts currently used in the entry-level Model 3. Based on the options selected by the buyer, it will likely cost between $39,000 to $60,000, which is a 10 percent jump in price compared to the Model 3.

Features of the Model Y include seven-passenger seating, panoramic sunroof and about 66 cubic feet of cargo space. Morgan Stanley analyst Adam Jonas said the Model Y is “likely to cannibalize the Model 3.”

“The Model Y offers substantially greater space, nearly identical performance, and nearly as much range as a Model 3… and it has 2 extra seats in a 3rd row which is a very big deal, especially for the US market … Pricing of Model Y is modestly more (less than 10% more?) than the comparable Model 3… and many might argue you get a lot more bang for the buck in the Y,” Jonas added. “With this potentially bullish catalyst out of the way, we anticipate a cautious narrative to resume its course until Tesla can put to bed market concerns over near-term demand, cash flow, and liquidity.”

The electric automaker recently revealed plans to shutter stores and reduce its workforce in an effort to curb costs. Additionally, CEO Elon Musk said Tesla would not be able to produce a profit in the first quarter of 2019.