You are at:Home»Thematic Investing Channel»China’s Plans for Public Blockchain Opens Opportunity for This ETF 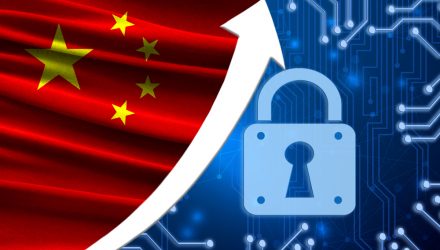 China’s Plans for Public Blockchain Opens Opportunity for This ETF

After banning cryptocurrency mining last year, China may have shown its hand on digital currencies, but that doesn’t mean it’s completely turned its back on the technology behind underlying digital assets. The second-largest economy is looking to leverage blockchain technology on a public platform.

Enter the Blockchain-based Service Network (BSN) — it’s China’s state-backed blockchain network designed for use within international markets, according to the South China Morning Post. August 31 marks the date when the beta version of the blockchain network will be released.

“Officially launched in 2020, BSN’s mission is to develop a global public infrastructure to deploy and operate all types of blockchain-distributed applications,” the South China Morning Post reported. “It aims to propel China into a leadership role in the industry this decade by making blockchain technologies easier and cheaper to use in businesses and institutions around the world.”

“That network is designed only for international markets because so-called open blockchains are not allowed in mainland China,” the report added, noting that the lack of open source capability prevents third parties from accessing the blockchain system.

If the project proves successful, this could open the pathways for other countries to implement something similar. Many companies are already leveraging the power of blockchain technology by integrating its use in making day-to-day operations more efficient and secure.

If other countries follow China’s lead, investment opportunities exist for blockchain-focused exchange traded funds (ETFs). With a 12.7% allocation to China, as of April 30, one ETF to consider is the Global X Blockchain ETF (BKCH).

The fund seeks to provide investment results that generally correspond to the price and yield performance of the Solactive Blockchain Index. The index is designed to provide exposure to companies that are positioned to benefit from further advances in the field of blockchain technology.