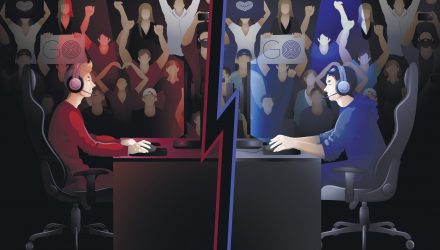 The VanEck Vectors Video Gaming and eSports ETF (NYSEArca: ESPO) is up more than 13%, confirming investors’ enthusiasm for the booming eSports market.

Major parts of the long-term eSports investment thesis are the massive growth in television viewership and subsequent spending by advertisers. Those themes are experiencing increasing validation.

“It’s game-on for advertisers in professional videogaming—e-sports—which has blossomed into a multibillion-dollar industry,” reports Jon Swartz for Barron’s. “EMarketer forecasts that U.S. digital ad revenue for e-sports will pass $200 million by 2020. Ad spending, which has grown mostly through corporate sponsorships, media rights, ticket sales, and merchandising, will grow 25% to $178.1 million this year, and another 20% to $213.8 million in 2020, eMarketer says.”

Data indicate that spending on video games is increasing, but that is on the consumer side. Viewership of eSports is also surging.

“The appeal is growing as more people—especially TV-averse millennials with disposable income—watch the sport on YouTube, Twitch, and other platforms. This year, 30.3 million people in the U.S. will view an e-sports event at least once a month, up more than 18% over last year, eMarketer says,” according to Barron’s.

By some estimates, current viewership of e-Sports competitions is on par with that of Major League Baseball and the National Hockey League (NHL).

The 2018 Overwatch League “final at Brooklyn’s Barclays Center sold out and was televised on ESPN, while the global monthly audience for e-sports, 167 million, exceeded those for pro baseball and hockey, says market researcher Newzoo. By 2022, the audience will hit 276 million a month, comparable to the NFL,” reports Barron’s.