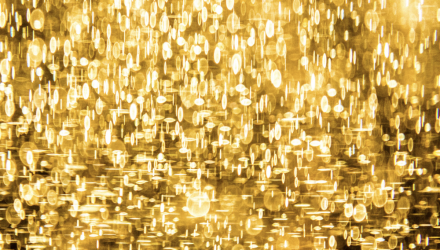 The Second Best Performing Asset Since 1999

Last week the world got its first look ever at a black hole, one of those cosmic bodies so supermassive and powerful that not even light can escape its pull. These things literally destroy all matter that comes within their reach, making them the trash compactors of the universe.

Some of you reading this right now can probably point to a few investments you made over the years that had more in common with black holes than you would care to admit.

Gold, I’m happy to say, is not among those investments, despite all the negative press it sometimes gets. The evidence keeps rolling in that the yellow metal has historically been a wise investment. Because it has a negative correlation with the market, gold has helped investors diversify their portfolios and improve their risk-adjusted returns. Back in January, I shared several charts showing how the price of gold has beaten the market over several time periods, including the 21st century (so far).

Take a look at the chart below, using data released last week by JPMorgan. For the 20-year period ended December 31, 2018, gold as an asset class had the second best annualized returns at 7.7 percent. Only REITs (real estate investment trusts) did better at nearly 10 percent.

The S&P 500, by comparison, returned only 5.6 percent on an annualized basis, but that’s after it underwent two huge pullbacks that greatly impacted performance. Bonds—which include Treasuries, government agency bonds, corporate bonds and more—came in next at 4.5 percent. Not bad, considering the asset class has lower overall volatility and risk than equities.

In last place is the “average investor” with a lackluster 1.9 percent.