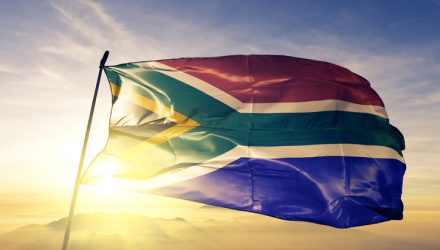 South Africa country-specific ETF was among the best performers on Wednesday as the rand currency rallied to its highest in almost a week on growing optimism that the central bank could intervene to bolster the economy on the backdrop of a lower-than-expected inflation rate.

After consumer inflation decreased more than expected, investors were betting that the Reserve Bank could cut rates again, following a 25 basis point cut to 6.5% in July, supporting companies and consumers, Reuters reports.

Strength in the rand also helped the emerging market after the currency plunged almost 10% since the start of August amid growing fears of a global recession.

“Repeated signs of inflation moderating during the third and fourth quarter of 2019 should present the SARB an opportunity to rejoin the global easing bandwagon,” research analyst at FXTM Lukman Otunuga said in a note.

The shifting sentiment that the global economy won’t slide into a recession has also helped fuel demand for riskier assets.

“The risk is back on, so all the shares that have been pummelled over the last few days have been catching up,” Byron Lotter, a portfolio manager at Vestact, told Reuters.

South African companies have been struggling to turn out a profit as strained consumers reduced spending and faced a weak growth outlook amid continued political uncertainty. Consequently, many believed monetary stimulus by a typically cautious central bank may be the only short-term solution.

“The SARB is likely to retain a cautious policy stance in view of the recent rand depreciation and persistent vulnerability of a sovereign credit rating downgrade,” Kamilla Kaplan of Investec, told Reuters.