You are at:Home»Beyond Basic Beta Channel»Reasons for Optimism Regarding Long-Term Oil Demand 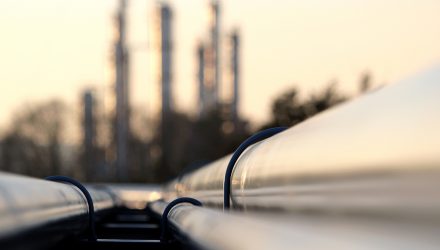 With all the talk about renewable energy adoption, fighting climate change and getting to net-zero, some investors may be apt to think the long-term outlook for fossil fuel equities and oil demand is negative.

The opposite could prove true, and some of that proof is arriving this year as oil prices and demand are surging. Same goes for the energy sector, as it’s the best-performing group in the S&P 500. Up 34.18% year-to-date, the VanEck Vectors Oil Services ETF (NYSEArca: OIH) is getting in on the act.

As the marquee oil services exchange traded fund, OIH is correlated, often intimately, to oil prices and demand. So it stands to reason that some investors might be pensive about the fund against the backdrop of soaring renewables adoption. Not so fast, according to some market observers.

“The bear scenarios reflect very rosy assumptions around the implementation and efficacy of carbon policy. Our base case is far closer to the business-as-usual scenarios for oil demand than the bearish scenarios. We project oil demand to drop from 99 mmbp/d in 2019 to 88 mmbp/d in 2050, an 11% drop or 0.4% annual decline,” writes Morningstar analyst Preston Caldwell.

The takeaways there are that, yes, oil demand will decline as more renewables projects are deployed. However, the timeline to material oil demand decreases is lengthy, and in the interim, there are bound to be periods when crude demand is robust, as is the case today. During those times, OIH could deliver for investors.

Another factor to consider is automotive demand. While transportation represents a significant percentage of consumer petroleum around the world, broader electric vehicle (EV) adoption — which will happen — is likely to be gradual.

“Still, the switch to EVs won’t happen overnight, owing to the long life of the average vehicle. For passenger cars, we expect greater demand than the bear scenarios due to sluggish efficiency gains for the remaining gas-burning cars on the road (including hybrids),” adds Caldwell.

Some other forms of industrial transportation and commerce can’t be electrified, potentially indicating that as markets reconcile increasing consumer demand for EVs, there could still be a long-term case for OIH.

“Ships and planes aren’t eligible for electrification, so the most promising route for replacing oil is using green hydrogen and its various derivatives. However, we’re skeptical that these alternatives will reach cost parity with oil even by 2050,” concludes Morningstar’s Caldwell.