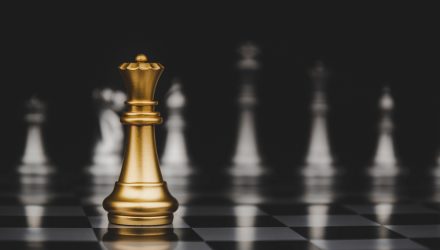 The combination of soaring inflation and elevated equity market volatility can be conducive to owning gold and the related exchange traded funds. That historical precedent is playing out this year.

Just look at the VanEck Merk Gold Trust (OUNZ). OUNZ, the first gold-backed ETF that delivers physical bullion to investors when they sell shares, is up 0.34% year-to-date. Conversely, the S&P 500 is lower by 23%. Translation: OUNZ is doing its job for investors in what’s proving to be a turbulent 2022.

In this climate, OUNZ’s performance is worth bragging about because it’s vastly superior to those of other major asset classes.

“Gold has once again shown itself to be a solid haven investment in the face of market turmoil. Even though bullion prices have dipped a little this year, they have massively outperformed other major asset classes such as stocks, bonds, and cryptocurrencies, which have all taken a beating,” reported Simon Constable for Barron’s.

Gold has long been one of the premier inflation-fighting assets, indicating that bullion buyers are focusing on that trait in 2022 and taking the Federal Reserve’s rate-tightening regime to mean that high consumer and producer prices will be with us for an extended period.

“Indeed, inflation has surged. It hit an annual rate of 8.6% in May, up from a comparatively modest 5.3% last August, according to data collated by TradingEconomics.com. And pundits don’t see any relief in sight soon,” according to Barron’s.

Further supporting the case for the $658.1 million OUNZ, which turned eight years old last month, is increasing speculation pertaining to a recession. Should economic contraction materialize in earnest, market participants would likely flee to safer assets, such as gold. That’s one potential catalyst in favor of long-term upside for spot gold prices and OUNZ.

Another is the fact that gold and ETFs such as OUNZ are behaving bullishly against the backdrop of a soaring U.S. dollar. Like other commodities, gold is denominated in dollars, meaning its price usually rises when the greenback declines.

“The dollar index, which tracks the value of the greenback versus major currencies, hit its highest level since 2002, according to TradingEconomics. Bullion prices tend to move inversely with the value of the dollar,” reported Barron’s.