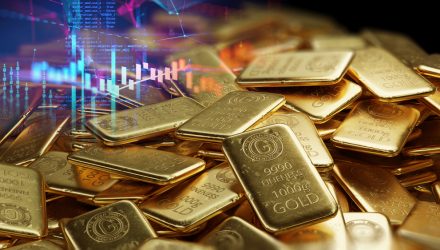 OUNZ Could Be Outstanding Commodities Idea in 2023

In terms of delivering upside, gold faced myriad challenges in 2022. Namely, rising interest rates are standing in the way of upside for the yellow metal.

However, bullion is performing significantly less poorly than broader equity and fixed income benchmarks. Among gold exchange traded funds, the VanEck Merk Gold Trust (OUNZ) proves as much. OUNZ isn’t in the green this year, but it’s been a noticeably better bet than the S&P 500 and the Bloomberg US Aggregate Bond Index.

OUNZ could be a viable consideration for investors looking for a tax-loss harvesting option or a commodities idea heading into 2023 because some market observers are wagering gold will shed its laggard ways in the new year.

In a recent report to clients, UBS analysts opined that the Federal Reserve could actually cut interest rates next year, which could boost bullion.

“We think gold should benefit and therefore holding a long gold position would offer an attractive risk-reward as the tightening cycle ends,” according to the bank.

Some investors might be surprised to learn rate-cutting could be in the offing next year, particularly with inflation still high. To that end, it’s not a guarantee the Fed will cut rates, and predicting if and when such a move will occur is difficult.

“Attempting to pick the bottom is always tricky,” said UBS’s Precious Metals Strategist Joni Teves in the research note. “That said, we think any weakness in gold in the coming months should ultimately offer opportunities to position for a move higher in prices throughout 2023, as the Fed pauses tightening and eventually shifts to a more dovish stance.”

OUNZ, which is eight and a half years old, has nearly $543 million in assets under management and is unique among gold ETFs in that it gives investors the option of taking delivery of physical gold when they redeem shares.

Another possible catalyst for OUNZ in 2023 is some high-level buyers remain fans of gold, a scenario that could gain momentum if global inflation remains elevated.

“Central banks have been net buyers of gold amid a broader trend of diversification away from the U.S. dollar. The Russian invasion of Ukraine earlier this year and ensuing sanctions have reinforced many countries’ strategies,” reports Ganesh Rao for CNBC.