You are at:Home»Tactical Allocation Channel»How to Invest in Esports – 10 Esports Stocks to Know 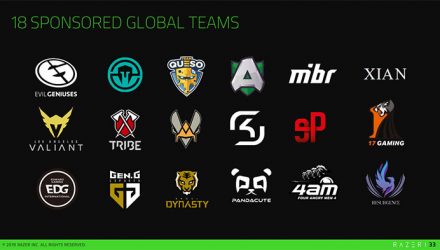 How to Invest in Esports – 10 Esports Stocks to Know

Enthusiast Gaming’s digital media network of websites and YouTube channels is verified as the largest online gaming information network in the United States and the United Kingdom. The company’s notable properties include Destructoid, Escapist, and The Sims Resource, whereby it monetizes via a combination of digital advertising and subscription services.

Razer is known as an endemic sponsor in esports, acting as the hardware partner for many of the top esports teams, including Immortals, Gen.G and Evil Geniuses. In total, they sponsor 18 organizations.

Turtle Beach was founded in 1975 as Octave Electronics, a company focused on music and audio-related products, including analog music synthesizers and PC sound cards. Over time, the company leveraged its audio expertise and evolved into one of the world’s premier gaming headset brands. Turtle Beach is credited with creating the first ever console gaming headset and is the leader in the North American console headset market.

Turtle Beach is the North American leader in gaming headsets, providing peripherals to everyone from casual gamers to esports professionals. Turtle Beach’s product line includes 21 console gaming headsets and 5 PC gaming headsets. In 2018, Turtle Beach posted a record year as a result of the “Fortnite Effect”. Fortnite, a battle royale title where 100 players compete in a single map, emphasized the importance of high-quality audio for casual gamers. In esports and streaming, Turtle Beach acts as an endemic sponsor. Notable partners include the Houston Outlaws (Overwatch), Astralis (CS:GO), and Dr. Disrespect (popular streamer).

In May 2019, Turtle Beach acquired Roccat, a Hamburg and Taipei-based provider of PC mice, keyboards, headsets, and software. Roccat offers a complete line of gaming mice (9), keyboards (8), and headsets (5). The company is built on German engineering, offering unique innovations targeting PC gamers. The acquisition of Roccat represents expansion into a new vertical (PC gaming) and new markets (Europe and Asia).

Broad-based companies are stakeholders in various segments in the esports value chain.

Free Fire, Garena’s self-developed mobile battle royale, is one of the world’s most popular mobile games. As of August 2019, the game had more than 450 million registered users — for reference, Fortnite last reported 250 million registered users. The title is especially popular in Latin America and Southeast Asia, generating in excess of $1 billion cumulative revenues. Free Fire has a burgeoning esports scene as well — the Free Fire World Series 2019 achieved over 100 million cumulative views, with more than 1 million concurrent viewers for the Brazilian qualifiers.

Garena+ is an online gaming platform. Through Garena+, the company publishes and distributes game software to Southeast Asia and Taiwan including Call of Duty: Mobile, Arena of Valor, and FIFA Online. Greater Southeast Asia is the world’s fastest-growing gaming and esports market.

In terms of revenue, Tencent is the largest gaming company in the world. In 2018, it earned more than $19 billion in gaming software sales, representing 18.4% of the global market. The Chinese company owns stakes in several notable game publishers, game developers, and livestreaming platforms.

Riot Games, a wholly-owned subsidiary of Tencent, is an American game developer, publisher and esports tournament operator. The company’s flagship product is League of Legends, a multiplayer online battle arena game. League of Legends is one of the world’s leading esports, and was the highest-grossing PC esport globally in 2018 at $1.9 billion in revenues, according to Niko Partners. League is one of the oldest esports, having recently celebrated its 10-year anniversary by announcing 8 million daily active players. It is also amongst the most developed in terms of infrastructure and scale, with parent company Riot Games overseeing franchised leagues on 3 continents. In 2019, Evil Geniuses acquired a slot in the North American LCS for a reported $30.25 million. In addition to League of Legends, Riot released Teamfight Tactics in 2019, and announced plans to release a series of additional titles in the coming years.

Epic is a video game and software development company. Epic is best-known for publishing Fortnite, the world’s most popular battle royale game. In terms of esports, Fortnite will award the largest dollar figure in prize money of any esport in 2019, highlighted by the $30 million Fortnite World Cup. According to Niko Partners, Fortnite generated $1.25 billion in 2018 on PC, with an additional $455 million from mobile (iOS only). In 2019, Epic Games purchased Psynoix, the developer of popular esport Rocket League. Epic Games’ additional properties include the Epic Games Store, and its Unreal Engine, one of the most successful game engines in the world. As of 2018, Epic Games was valued at an estimated $15 billion.

As highlighted above, there are various publicly-traded stocks that provide exposure to the esports ecosystem. Below is a summary of the ten companies we highlighted.