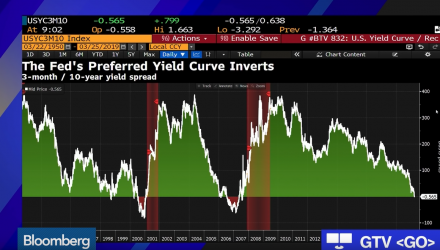 An inverted yield curve has been the cause of much angst the past week in the capital markets.

The pair consisting of the short-term 3-month Treasury yield and the long-term 10-year yield have been the prime focus the past week. On Tuesday, the 3-month note eased off its upward ascent while the 10-year yield climbed, decreasing the steepness of the inversion.

The spread between the 3-month and 10-year notes fell below 10 basis points for the first time in over a decade. This strong recession indicator contrasted a more upbeat central bank, but investors were quick to sense the cautiousness.