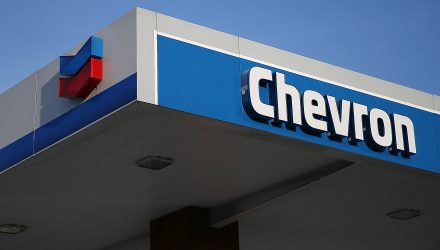 Anadarko is currently FRAK’s largest holding at a weight of 8.59%.

“The strategic rationale for the transaction is aimed at providing additional scale for Chevron within U.S. unconventionals, global deepwater and LNG. In the U.S. Lower 48, Anadarko’s Permian Basin portfolio would supplement Chevron’s existing footprint in the Permian’s Delaware Basin, while adding a new position in the Denver-Julesburg Basin,” said Markit in a recent note. “Based on IHS Markit’s current projections for both companies, net U.S. unconventionals output from the pro-forma company could reach 2 million barrels-of-oil-equivalent (BOE)/day by 2025.”

Assuming completion of the deal, Chevron’s acquisition of Anadarko gives the former significant scale in the Permian Basin and also a major runway for growth in one of most oil-rich regions in the lower 48 states. Due to the growth opportunities available in the Permian Basin, some other FRAK holdings could very well be acquisition targets for larger, integrated oil companies.

“Don’t forget the growth. Aside from scale, this deal would deliver growth,” said Markit. “On a pro-forma basis, the combined Chevron/Anadarko would also be the highest growth portfolio among the peer group, with IHS Markit forecasting growth at a 4.1% Compound Annual Growth Rate (CAGR) between 2018 and 2025, for the combined company (ahead of second-ranked ExxonMobil’s 3.6% CAGR during that time).”

The two combined companies will produce about 3.6 million barrels a day, or 5% less than Exxon and similar to the output of other giant oil companies like Royal Dutch Shell PLC and BP PLC. Chevron would also bolster its footprint in the global liquefied natural gas (LNG) market with the Anadarko acquisition.

“Anadarko’s portfolio would also provide a growth opportunity within LNG. The Mozambique LNG project is nearing a final investment decision, and progress on this development would provide Chevron with a new growth option in its LNG portfolio following the recent wave of operated Australian LNG developments that have come onstream in the last few years,” according to Markit.