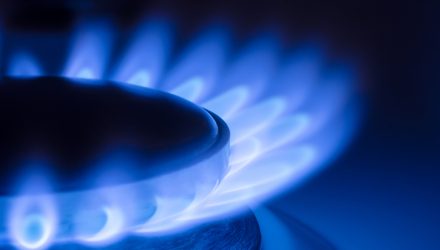 Natural gas exchange traded funds led the charge on Friday as natgas prices hit a high for the June series on prospects of extended supply disruptions and potentially higher demand to combat the summer heat.

On the supply side, a pipeline notice fueled bets of prolonged supply disruptions out of the Northeast, Natural Gas Intelligence reports. Texas Eastern Transmission Co. (Tetco) stated that a pressure reduction started this month on part of its 30-inch diameter system due to a Pipeline and Hazardous Material Safety Administration (PHMSA) order, which could last until late in the third quarter.

“While some of the affected gas is likely to be re-routed, flows from Appalachia to the South could be reduced for months,” EBW Analytics Group analysts said in a note. “It is also possible that sections of the pipeline will need to be shut down while the anomaly is being corrected, further magnifying the impact on gas prices.”

On the demand side, NatGasWeather for June 11-17 anticipated warmer weather ahead for many regions.

“The southern U.S. remain hot with highs of 90s and 100s due to strong upper high pressure. A weather system over the Ohio Valley and Mid-Atlantic Coast continues to bring showers with warm highs of 80s. California and the Northwest remain mild to nice with highs of 60s to 80s as a new Pacific weather system arrives with showers,” according to NatGasWeather.

“Dangerously hot high pressure will shift over the Southwest and Plains next week with highs of 90s to 115 Fahrenheit, hottest in the deserts, while weather systems with showers sweep across the Great Lakes and East with highs of 60s to 80s. Overall, high national demand this week.”