You are at:Home»Alternative ETFs»Sugar ETPs Are Enjoying a Sweet Year 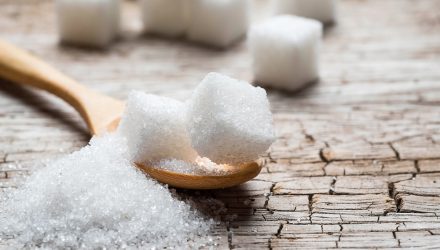 Meanwhile, prices on raw sugar futures have surged 10% over the past month and are now trading at their highest level since early 2017, increasing 60% over the past year.

A cold snap in Brazil, the world’s largest producer of sugar cane, has fueled the rally this year, the Wall Street Journal reports.

Severe frosts have frozen the sugar-producing Center-South region, including Paraná, São Paulo, and Minas Gerais over June and July. The low temperatures have stunted sugar canes and reduced overall sugar content. Consequently, farmers have been forced to reorganize their harvest schedules and cut crops that had already been affected by an ongoing drought in the Latin American country.

“Whichever way you look at it, this season for Brazil is not going to be a good one,” Stephen Geldart, head of analysis at Czarnikow Group, told the WSJ.

Observers project raw sugar production in the Center-South region this year will vary between about 29 million metric tons and 33 million, according to Geldart, or down from 38.5 million last year. “We will find out in the next month,” he added.

“It’s a very tough time for the sugar consumers,” Bruno Lima, head of the sugar and ethanol division for Brazil at StoneX Group, told the WSJ, adding that buyers are trying to take advantage of declines in the market to lock in prices for future deliveries.

For more information on the sugar market, visit our sugar category.