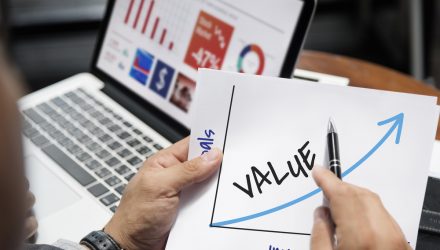 Value ETFs Take in $1 Billion During Month of August

As the economy slowly returns to normal, it might seem that growth could be back in full force as investors look to add more risk to their portfolios. However, value exchange-traded funds (ETFs) took in $1 billion during the month of August.

“Value-based exchange-traded funds — which take into account factors such as dividend yields and price-to-earnings ratios to choose their holdings — have accrued $1 billion in inflows over the past month, according to CFRA Research’s First Bridge Data,” a CNBC article noted. “Some of that money came from growth ETFs as investors sold Big Tech during its worst pullback in months, “but not all of it,” said Todd Rosenbluth, senior director of ETF and mutual fund research at CFRA.”

“Some of [it]moved to the sidelines or investors wanted to be even more diversified,” he said Monday on CNBC’s “ETF Edge.” “We still think growth has the next leg to go higher.”

The article also noted that with “interest rates staying low for the foreseeable future and a ‘cyclically strong’ quarter ahead, funds such as the iShares S&P 500 Growth ETF (IVW) and the Vanguard Growth Index Fund ETF (VUG) are poised to climb and resume their lead over value, Rosenbluth said.”

“We think that growth is going to outperform as we head into the election,” Rosenbluth said. “We need interest rates to climb higher for value strategies to do well.”

In the same “ETF Edge” interview, Steve Grasso, director of institutional sales at Stuart Frankel, said value’s underperformance in recent times has been due to market uncertainty, deflation, and falling interest rates. However, the tide could be turning.

“People are starting to feel as if the deflation cycle is coming to an end and we’ll start to see inflation picking up. Or at least with rates, they don’t have to move aggressively higher, they just can’t move lower. So I think the two of the three drivers that we’ve seen for the underperformance of value are starting to have cracks in the armor,” Grasso said.

Another option is the Vanguard Value Index Fund ETF Shares (NYSEArca: VTV). VTV seeks to track the performance of a benchmark index that measures the investment return of large-capitalization value stocks.