You are at:Home»Smart Beta Channel»Foundation In Place For A Secular Bull Market In India? 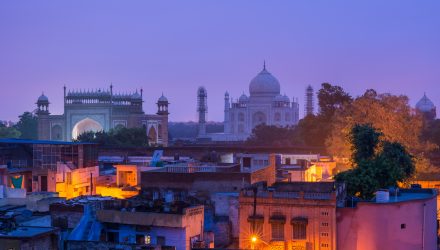 Foundation In Place For A Secular Bull Market In India?

The Taj Mahal was built on the muddy bank of the Yamuna river by emperor Shah Jahan. It’s estimated that construction began in 1632 and ended in 1653, five years before Shah Jahan’s death. The ability of this world heritage site to stand for 360 plus years is due in large part to its unique foundation created by chief architect Ustad Ahmad Lahauri. The main architectural challenge was how to develop a foundation that wouldn’t sink during the annual monsoons that swell up the Yamuna river. Lahauri came up with an ingenious system of conduits and drainage pipes encased in mortar. In addition, shafts or “wells” made of ebony wood were sunk into the conduit system to keep it ventilated and dry. A strong foundation was a key criteria in the stability of the Taj Mahal. Similarly, I believe that three key factors are in place that will provide a solid foundation for an enduring bull market in Indian equities.

India is now the 7th largest economy in the world with a nominal GDP of $2.5 trillion. Additionally, with the IMF forecasting real GDP growth in 2017 and 2018 above 7%, it’s also the fastest growing large economy in the world. Although nominal GDP growth doesn’t directly translate into stock returns, it is a good proxy for total revenue growth generated by India’s largest publicly listed companies. Additionally, in the long run corporate earnings growth can’t outstrip nominal GDP growth. Thus, it’s a fair assumption that earnings growth can be sustained at 10% (7% real GDP growth + 3% inflation) from a macro perspective. From a micro viewpoint many small and mid-cap companies will grow earnings at much higher rates than 10% for the foreseeable future. That’s why we believe in an active stock-picking approach. However, strong corporate earnings growth is one of the key foundations of the secular bull market in India.

The Indian rupee is currently trading near a 2-year high relative to the US dollar. The strength in the Rupee has been driven by the decline in inflation and strong foreign portfolio inflows. As a foreign equity investor the combination of the potential for further rate cuts by the RBI and the prospect of a stable currency is highly attractive. Strong corporate earnings growth and higher valuation levels will translate into higher total shareholder returns even in US dollar denominated terms.

India is currently ranked 130 among 190 economies in the Ease of Doing Business ranking done by the World Bank. That’s an improvement from 131 in 2015. The situation reminds me of the lyrics to Drake’s Fake Love, “I’ve been down so long it look like up to me.” When you’re starting from such a low base there really is nowhere to go but up. Fortunately reformist Prime Minister Narendra Modi has been aggressively pushing through market based reforms.

The Goods & Service Tax Act was passed on March 29th, 2017 and came into effect on July 1st, 2017. It’s not an exaggeration to state that it has completely revolutionized the Indian taxation system. For the first time in its 70 year post-independence history, there is one taxation regime across the entire country. India has finally become a unified common market. Prior to the implementation of GST, businesses in India faced a byzantine set of taxation rules that varied from state to state. The passage of the GST bill has facilitated trade and commerce across the country.

Modi’s reformist credentials have been bolstered and he’s publicly stated, “we have placed the highest Emphasis on Ease of Doing Business.” India is already the fastest growing economy among the G-20. If the economic reforms continue and Modi hits his target of reaching a top 50 ranking, GDP growth could accelerate further. The so called “Hindu” rate of growth is now a relic of India’s socialist centrally planned past.

As a global equities analyst, I can say from experience that all emerging markets have corporate governance issues. The main problems revolve around the misappropriation of corporate assets by majority owners, misuse of related party transactions and exorbitant managerial compensation. As a minority shareholder you want to own businesses run by honest and competent management teams with a record of good corporate governance.

India actually ranked 13th globally in terms of protecting minority investors in the aforementioned Ease of Doing Business Index. This achievement was not fortuitous but by design. India recently carried out an ambitious and exhaustive overhaul of its Companies Act. The end result was improved disclosure norms, greater transparency and the mandatory inclusion of independent directors on Boards.

Many commentators have provided the recent in-fighting at Tata and Infosys as proof that good corporate governance is still a moving target at even India’s largest corporations. I have a slightly different take. Before I give you my view, I’m going to give you a brief history lesson. The majority of publicly listed Indian corporations began as family-owned businesses. Thus, there was no separation between the finances of the family and the business. Admittedly the family owners continued to hold disproportionate sway over business decisions and nepotism was a common business practice. After these family owned business went public they slowly started changing by bringing in professional management and improving the treatment of minority shareholders. In my view, the recent dust-up at Infosys reflects the fact that Boards will no longer kowtow to founders/family members and will take into account the views of all stakeholders including minority shareholders. The fact that a company’s famous founder can be publicly challenged by an independent board and professional management team reflects the progress that has been made since the days of companies being run as personal fiefdoms.

Many academic studies have shown that good corporate governance leads to better shareholder returns. India has better corporate governance than many of its emerging market peers combined with faster growth. This unique combination makes Indian equities attractive for global investors.

In summary, the three critical factors providing the foundation for a secular bull market in India are the following:

Just as the well designed foundation of the Taj Mahal has allowed it to withstand the waxing and waning of the Yamuna river over centuries, the critical foundations for a secular bull market in Indian equities is also in place.