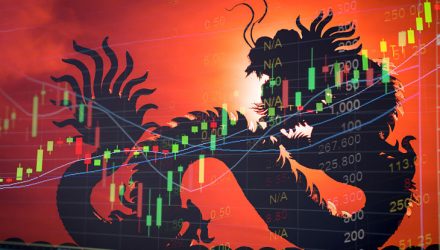 “ASHR, which is based on an index tracking 300 major Chinese companies, isn’t exactly the hottest property among options traders. Total open interest on the fund totals fewer than 98,000 contracts as of this writing, which — per Trade-Alert — registers in the low 4th percentile of its annual range. But while speculators may have lost interest in ASHR of late, technicians will want to take note of a critical chart level that’s once again in play for the China-based fund,” according to Schaeffer’s Investment Research.

“Further, we’d note that ASHR’s Relative Momentum Index (RMI) is in the process of rolling lower from a move up to 89.90 — this metric’s highest point since the second quarter of 2015. Back in August 2014 — a year where the price action in ASHR has echoed the current calendar year pretty closely — the RMI rolled lower after peaking just shy of 90 on multiple occasions through the first half of the month. And while ASHR chopped around the charts through late October as its RMI fell back toward the midpoint of 50, the shares then went on to rally 40% during the two-month stretch into year-end 2014,” according to Schaeffer’s.

The Chinese economy is also shifting towards domestic-oriented consumption as a main growth driver. Consequently, consumption-driven sectors like technology and services are becoming a growing component in the economy.