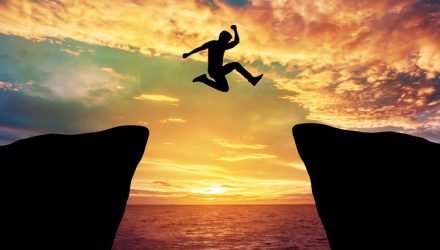 PDP allocates a combined 37% of its weight to technology and consumer discretionary stocks, two sectors that are often hallmarks of momentum-based strategies. However, the ETF’s largest sector allocation is 24.6% to industrials. With energy being the worst-performing sector this year, indicating it is lacking momentum, the group receives only token representation in PDP. A similar scenario was seen in 2014 when oil tumbled and PDP featured scant energy exposure.

An important source of PDP’s momentum can be derived from the ETF’s underlying index not being confined to one market cap segment. For example, just 37% of PDP’s holdings are large-caps, but more than 47% are mid-cap growth or mid-cap blend stocks.

Since momentum strategies can overweight riskier stocks, the ETF could could underperform during another correction. Since defensive stocks typically do better during volatile conditions, the momentum strategy could load up on conservative picks and miss out on the initial recovery in riskier assets.

PDP holds 100 stocks with an average market capitalization of $61.7 billion, according to issuer data. The ETF returned 25% over the past three years.