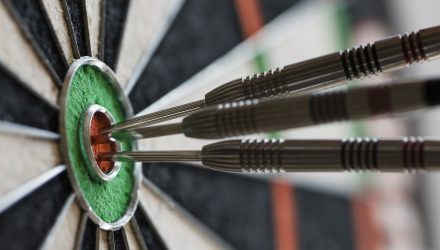 The iShares Russell 2000 ETF (NYSEArca: IWM), which tracks the benchmark Russell 2000 Index, is up more than 6% over the past month, outperforming major large-cap indexes along the way. Some market observers small-cap can continue outpacing their large counterparts.

The Russell 2000 (RUT) “as I have observed many times, is an index that tends to pivot both short-term and long-term at both half-century and century marks. For most of this year, the 1,600 level acted as resistance while both the 1,450 and 1,500 areas acted as support on separate pullbacks in early February and April. The RUT comes into this week just below the 1,650 half-century mark, which marked last week’s highs in both the Wednesday and Friday trading sessions,” according to Schaeffer’s Investment Research.

Small-cap companies have often paid higher tax rates than their larger rivals, which means that in many cases they have more to gain from the tax cuts introduced this year.

A stronger dollar means large companies with an international footprint are more susceptible to lower overseas demand for their products. Meanwhile, smaller companies are able to capitalize on a stronger domestic economy. Of the Russell 2000, S&P 500 and Nasdaq-100, only the small-cap benchmark has recently been notching fresh highs.