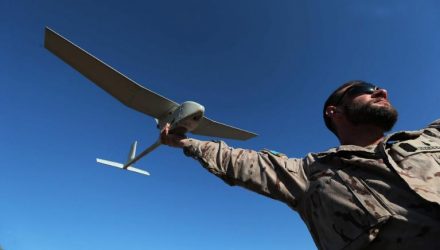 By Jeremie Capron via Iris.xyz

Bill Alpert, Barron’s Senior Editor, stirred the pot a bit last week when he published Robo-Boosted Drone Maker AeroVironment May Be Headed for a Fall. In his article, he states that “the only apparent explanation” for military drone maker AeroVironment’s skyrocketing stock price is the fact that “trendy ETFs like ROBO Global Robotics & Automation (ROBO)” have made AeroVironment (AVAV) a top holding. It’s an interesting presumption, but it’s a skewed concept that does AeroVironment—and ROBO Global for that matter—a considerable disservice.

What Alpert (or perhaps hedge fund manager Ben Axler who is quoted as the source for the theory) must not have realized is that this explanation holds no water. AeroVironment is a bellwether member of the ROBO Global Robotics & Automation Index, which means it represents less than 2% of the index and of the ROBO ETF.

At that small percentage, even the large inflows into the flagship Robotics & Automation ETF could not be the main reason for the stock’s impressive advance this year. We estimate that the ROBO ETF accumulated just over 600,000 shares of AVAV in the first nine months of 2017, which represents an average of 3,200 shares per day, compared to the daily average 227,000 shares that traded on the market over that period.

It would it be quite improbable—if not wholly impossible—for a buyer that is less than 2% of the flow in a stock to move its price materially. In fact, most institutional traders would agree that it would take more than 10 times that level of trading to have a significant market impact.