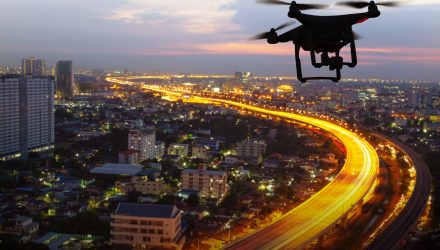 Related: 4 Blockchains ETFs: Which to Choose?

Indiana law specifies that police departments can use drones for search-and-rescue efforts, to record crash scenes and to help in emergencies, but otherwise a warrant is required to use a drone. That means police probably won’t be able to fly them near large gatherings unless a terrorist attack or crime is under way.

Similarly, many countries have procured drones for law and order and aerial surveillance, as European and other international institutions are taking a keen interest in AI. They serve a role in establishing suitable international ethical and regulatory frameworks for these developments. These include, for example, the new General Data Protection Regulation (GDPR), but also new frameworks for ethical use of AI, including transparency of decision making.

Other forms of AI for proactive policing

Drones are not the only types of AI being considered for proactive policing. What about identifying stressed out police officers who may need a break? A system developed by Rayid Ghani at the University of Chicago increases the accuracy of identifying these “at-risk” officers by 12 percent, and reduces false positives by a third. The system is also used by the Charlotte-Mecklenburg (NC) Police Department.

To succeed in this environment, agencies need modern tools capable of joining and interpreting huge quantities of data, alert generation, anomaly detection and AI techniques while supporting officers through the rigors of due process.

Law enforcement and public safety agencies engaged at all levels of government are required to exploit disparate and diverse data sets to be effective in their operations – that’s what drones, AI and proactive policing have in common. But massive and ever-increasing quantities of data can strain limited operational resources. And without appropriate focus, the risk of failing to identify areas of increasing threat multiplies.

The challenge for agencies is further intensified by the need to adhere to mandatory legislative processes. To succeed in this environment, agencies need modern tools capable of joining and interpreting huge quantities of data, alert generation, anomaly detection and AI techniques while supporting officers through the rigors of due process.

The reality is that AI is showing improved results. Intelligence analysts are testing and using deep learning, natural language processing and machine learning techniques in real-life law enforcement scenarios that can help change our world for the good.

Although we haven’t reached super hero status in our accomplishments (though it would appear we had with the filming of Iron Man 3 at our own SAS headquarters), who knows what the future holds? Like anything that is truly worthy and good for humankind, there will always be pitfalls and challenges, but now is the time to seize what possibilities lie ahead.

This article has been republished with permission from SAS.