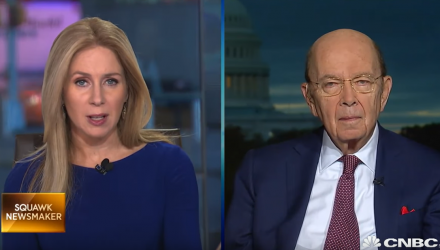 Furthermore, signs of an economic slowdown came from the bond markets as the three-year Treasury note climbed past the five-year note on Monday, causing a yield curve inversion–typically a telltale sign that a significant market downturn looms.

All the doom and gloom with enough blame to go around has been primarily directed at either the Federal Reserve for raising rates too quickly or President Trump who was too aggressive with implementing tariffs. Ross posits that it’s neither–it all goes back to the press.

“Remember, when President Trump first came in, people reiterated the slow growth phenomenon, they were wrong,” said Ross. “Then, when he started getting good growth, they tried to pretend ‘Oh, it was just a carryover from Obama, they were wrong about that–it had to do with regulatory reform and tax cuts.”

“I think instead of speculating like that, people ought to judge the Trump administration by what it does, not what they think may be some boogeyman hiding out in the future,” Ross added.