You are at:Home»Retirement Income Channel»When It Comes to Geopolitical Shocks to Markets, Play the Long Game 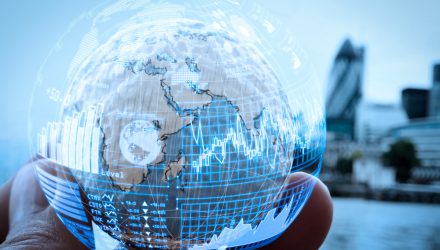 When It Comes to Geopolitical Shocks to Markets, Play the Long Game

Russia’s invasion of Ukraine is the first time a European sovereign state has invaded another since World War II and has brought turmoil, uncertainty, and fear for already-volatile markets in the U.S. and around the world. However, shocks to markets due to geopolitical events, while having pronounced immediate impacts, have historically not had long-term effects on markets, explains Mark Hackett, chief of investment research for Nationwide’s Investment Management Group in a recent blog post for Nationwide.

Stocks and markets in the immediate month or two after a geopolitical shock are often volatile as investor fears drive more pronounced market swings, but at a 12-month mark after the event, markets have historically returned to align with their averages. 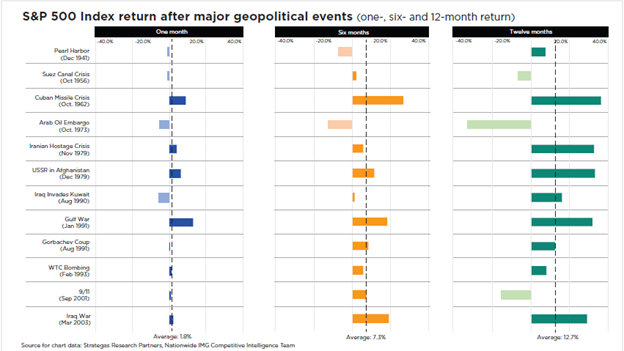 Hackett describes U.S. markets by noting that one month after major events, the S&P 500 averaged a 1.8% gain. After six months, the average gain was 7.2%, and 12 months after events, the average return was 12.7%. It’s important to note that volatility remained high during these periods after geopolitical shocks, with the S&P 500 having an average absolute change of 22%.

“The current consensus estimate for 2022 GDP growth is 3.8%, followed by 2.4% in 2023. Both estimates are well above the average pace of GDP growth since the financial crisis,” Hackett writes. “If the economy can withstand the stress and avoid a recession, patience during this period of stress will likely be rewarded.”

Markets generally average at least one 10% drop (correction) in any given year, but 2021 had a maximum decline of less than 5%. The invasion by Russia has sparked a correction in markets when advisors and investors were already concerned about rising interest rates and inflation. Bond markets continue to reflect the uncertainty that is being felt by investors, with the likelihood of a 0.50% interest rate increase by the Fed measured by Fed funds futures going from a 90% likelihood in February to less than 10% now.

Earnings in Q4 were strong with companies growing their margins, and expectations for Q1 earnings growth are close to 10%. The forward price/earnings ratio for the S&P 500 is at 18.5 currently, the lowest level it has been since April 2020 when the pandemic was shuttering companies and the economy. It provides a window of opportunity for growth once the crisis in Ukraine has passed.

“These geopolitical events are fast-moving and hard to model for in an investment strategy, but history shows they haven’t had a lasting impact from an investment standpoint. Discipline and patience are recommended in the near term, at least until we get greater clarity on global events and investors can return their focus to economic fundamentals,” writes Hackett.