You are at:Home»Retirement Income Channel»U.S. Economy Resumes Its Growth Trajectory 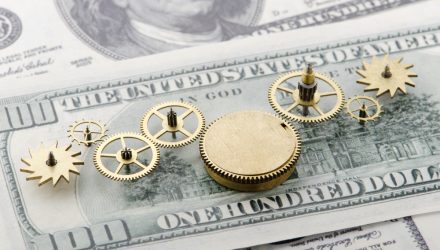 The S&P 500 is up more than 17% year-to-date, but as is often said, the stock market isn’t the economy. Fortunately, new data support the notion that the U.S. economy is rebounding in earnest from last year’s coronavirus recession.

In fact, that economic contraction was one of the briefest on record.

“The remarkable resilience of the U.S. equity market is being echoed in the U.S. economy. Last month, the National Bureau of Economic Research officially announced the recession of 2020 was the shortest on record, lasting just two months and ending in April. Second-quarter GDP for 2021, which was announced last Thursday, showed economic activity exceeded the peak from Q4 2019,” says Nationwide’s Mark Hackett.

Now the trick is meeting expectations. The world’s largest economy grew at a stellar 6.5% rate in the second quarter, but that was less than what economists were calling for. Some help from the consumer could go a long way toward meeting or beating GDP growth expectations.

“Consumer spending typically accounts for around two-thirds of GDP. In Q2, consumers contributed 7.8% to GDP growth thanks to pent-up demand after the lockdowns and greater ability to spend due to high savings rates, continued government support and record levels of wealth,” adds Hackett.

It’s also often said that equities are leading indicators while economic data are lagging indicators. However, it would be difficult for stocks and riskier assets to rise if the U.S. economy is slumping. Fortunately, economists expect the economy will continue expanding into year-end, although it’s likely to be at a more muted pace than what was seen in the first six months of 2021.

“This strong period of economic growth for the U.S. is expected to continue, with the IMF forecasting U.S. annual GDP growth in 2021 at 7.0% and 4.9% in 2022. Given that inflation is expected to remain elevated, strong nominal growth is a tremendous tailwind for corporate profits,” notes Hackett.

As Hackett points out, investors should prepare for a cooling off in S&P 500 revenue growth next year.

“Revenue growth for S&P 500® Index firms in 2021 is projected at 14% but is expected to fall to 6% next year. This is below the expected rate of nominal GDP growth, so that estimate will likely prove conservative. Upside to earnings is critical for continued market returns, given that the S&P 500 Index currently trades at 20-times next year’s earnings,” he concludes.