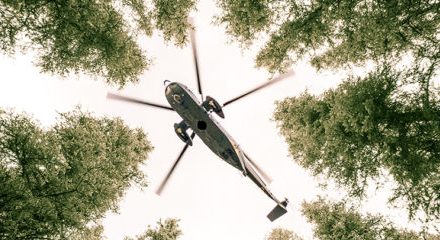 The Helicopters are Coming: Three Prerequisites for Markets to Stabilize

The outlook of investors has changed dramatically since the beginning of the year and will likely continue to shift as we enter Q2. The key development over the last month is that, while few new infections have been diagnosed in China, the number of new cases in Europe, the U.S. and many other countries is accelerating. The associated shocks have resulted in severe market dislocations, with the main purpose of this blog being to explain the three requirements for markets to stabilize and begin to recover: 1) a peak in the rate of new infections, 2) a large, timely and effective fiscal package, and 3) rapid normalization in credit markets.

Outside of China, South Korea is one of the few countries to experience a declining trend in new cases. Unfortunately, the number of confirmed cases in Europe and the U.S. are still increasing exponentially. One reason why the numbers in the U.S. are rising so quickly is that testing is finally ramping up. There is every reason to believe that the number of cases is currently being vastly understated, and certainly not just in the U.S.

Another way to look at the outbreak is to chart the number of new cases over the last three days. On that metric, Hubei and South Korea are clearly past the peak, with their inflection points being reached about six weeks after their outbreaks started. One potentially worrisome development is that it appears South Korea might be starting a second wave (as occurred earlier in Japan). Meanwhile, we’ve observed a number of false peaks, for example, in Iran, Italy, and Germany. This suggests one needs to proceed cautiously when interpreting peaks and troughs in the number of new infections.

Many commentators worry that the number of new cases will continue to skyrocket indefinitely. However, in the real world there is no such thing as an exponential curve, even though it might look like it for two to six weeks. The evidence from Hubei and South Korea suggests the U.S. could reach its inflection point in about four weeks (NYC could well be earlier). This will depend crucially on the effectiveness of the government-mandated social distancing measures being implemented.

Hubei imposed a 50-day lockdown period to suppress the virus. One result was the most severe economic contraction experienced in China since Mao. The good news is that economic activity is climbing back to normal, albeit quite slowly. The gradual rate is deliberate and meant to minimize the chance of a second wave of cases, which would be a very negative and worrisome development.

The Most Aggressive Fiscal Stimulus Package Ever

While the U.S. data may not turn down as sharply and deeply as China’s, a recession seems inevitable and we have witnessed a breathtaking spike in layoffs. At the beginning of the year the unemployment rate was at its lowest level since Nixon was President. Unfortunately, it is likely to soon retest the peak hit during the Global Financial Crisis.

The Fed was the focus of policymaking in 2008. This made sense as the GFC was primarily a crisis of the financial sector, which then spread into the real economy. The situation today is the reverse, as the ongoing supply and demand shocks are hitting the real economy directly, and then spreading into the financial sector. This means fiscal policy, possibly financed by Fed QE, needs to play the leading role. As the chart below demonstrates, the U.S. is currently implementing the most aggressive fiscal stimulus package ever.

Regardless, the Fed has already put into place its playbook from the GFC. Although monetary policy can’t do much to stimulate the real economy in the midst of social distancing, it can help stabilize financial markets. Moreover, by working so closely with the Treasury and helping to fund the $2 tn fiscal package, it appears we have quietly entered the brave new world of Modern Monetary Theory.

The Disruption Resulting from Social Distancing

This schematic illustrates how money flows through the real economy, with a red “X” used to show disruptions caused by the shocks associated with social distancing. This demonstrates that during the current crisis the key objective of economic policy needs to be supporting vulnerable and exposed households and small businesses. Unfortunately, policymakers don’t have a tried and tested playbook for this type of scenario, suggesting a very rocky road likely lies ahead.

Note the key role played by the financial sector and credit markets in today’s complex and interlinked economy. As also happened during the GFC, credit markets are seizing up and market volatility has spiked. This has brought into play a number of negative feedback loops that the Fed is frantically, and so far with mixed success, trying to suppress.

To some extent this is a problem of the Fed’s own making. Since 2008 it has helped keep interest rates extraordinarily low and done much to suppress market volatility. This has encouraged corporates to raise leverage to record high levels, as seen in the explosive growth of both investment grade and high yield markets. The latter is particularly problematic, as the Fed has few tools available to manage disruptions and dislocations in the high yield market.

Sharply higher volatility has been associated with a spike in HY spreads, a collapse in liquidity and a seizing up of funding markets. This represents a clear and present danger for American businesses, especially small- and medium-size enterprises, as well as larger firms without an investment grade rating. Alleviating these disruptions and dislocations needs to be a key focus of policymakers.

Broadly defined financial conditions are now as stressed as they were during the GFC. The Fed has implemented a wide range of policies to improve liquidity and market depth. However, this is especially difficult to do in markets associated with credit risk, as the Fed faces a number of statutory limitations, several of them imposed by Congress after the GFC. Among other things, this means the Fed will have to work more closely with the Treasury than it did in 2008.

Meanwhile, the leveraged loan market has taken a big hit over the last month as economic activity has collapsed, and default risks have soared. This can also be seen in the skyrocketing number of distressed bonds and mounting outflows from mutual funds that specialize in investment grade bonds. These developments, plus the promise of extraordinarily low interest rates for an extended period, has created an especially challenging environment for banks.

Over the last fifty years it has, on average, taken over nine months for the SPX to drop by 30%. The speed and severity of this bear market is most similar to 1987 (which was more technical or structural in nature and did not involve a recession) and 2008 (after Lehman’s collapse). While valuations may appear superficially attractive, we believe we are not yet at the point where markets can stabilize and begin to recover.

Even in this challenging market environment, we expect dividends are likely to remain robust. To illustrate, during 2008 and 2009, total cash usage by S&P 500 companies declined by 16% and 18%, respectively. While buybacks fell significantly (before roaring back in 2010 and 2011), dividends actually increased by 2% in 2008 and then decreased by a modest 8% in 2009. Regardless, it is especially crucial in this environment to identify companies that have sustainable cash flows and are focused on maintaining their dividends.

Source: Bloomberg, Epoch Investment Partners, as of 3/29/20. SPX represents the S&P 500 Index. Past performance is no guarantee of future results. An investment cannot be made in an index.

European equity markets are likely to keep underperforming the U.S., as they have consistently done since 2006. While the recession is likely to be as bad on the continent as in the U.S, the policy response has so far been much weaker. Also, European companies are less likely to lay off workers than their U.S. counterparts. On the positive side, this means their unemployment rate is unlikely to soar as high. Unfortunately, it also implies a weaker outlook for corporate earnings.

Among our economic scenarios, a snapback is the most optimistic. However, it requires three conditions: that the outbreak is quickly suppressed, that policy responses are timely and effective, and that credit markets rapidly normalize. While possible, this is a tall order and requires an awful lot of things to go right. We are especially concerned about all the hidden leverage (“you find out who’s been swimming naked when the tide goes out”) and the law of unintended consequences. The path out of a crisis is rarely smooth and uneventful. Moreover, without widespread availability of testing kits and personal protection equipment it is difficult to predict when consumers will flock back to malls, workers return to their offices, and children tread back to schools.

What metrics should we monitor to know when the economic recovery has finally started? Many commentators rely on PMIs and other conventional metrics, which unfortunately are available only with a long lag. Much more timely data are available from new sources, such as OpenTable, which provides the year-on-year percentage change in dinner reservations for a host of cities. Similarly, Citymapper’s data shows up-to-date commuter activity for a large number of cities in the U.S. and abroad. Also, Homebase.com provides daily data on hourly employees at SMEs, broken out by city and industry. We will be keep tracking these sites closely for signs of emerging green shoots.

Requirements for markets to stabilize and begin to recover

However, dividends are likely to remain robust: As they did during the GFC, partially reflecting a capital-lite world. Consequently, even though some firms may reduce buybacks, the yield available from equities can be far superior to that attainable in fixed income markets.

Free cash flow yield: Is one of the variables with the best track record in the recovery from a bear market. (Source: Empirical Research)

As a result of the above points, we believe the best positioned companies are those that have a demonstrated ability to produce sustainable FCF and allocate that cash flow effectively between return of capital options and reinvestment/acquisition opportunities.

Opinions expressed above are subject to change at any time, are not guaranteed and should not be considered investment advice.

Certain information may constitute “forward-looking” statements, which can be identified by the use of forward-looking terminology such as “may,” “will,” “should,” expect,” “estimate,” or “believe” or other variations thereof. Due to various risks and uncertainties, actual events or results may differ materially from those reflected or contemplated in such forward-looking statements.

The strategies discussed are strictly for illustrative and educational purposes and are not a recommendation, offer or solicitation to buy or sell any securities or to adopt any investment strategy. There is no guarantee that any strategies discussed will be effective. The opinions expressed are those of Epoch Investment Partners, Inc. as of the date of this report and are subject to change. There is no guarantee that any forecast made will come to pass. This material does not constitute investment advice and is not intended as an endorsement of any specific investment.

The S&P 500® Index is widely regarded as the standard index for measuring large-cap U.S. stock market performance. Index results assume the reinvestment of all capital gain and dividend distributions. An investment cannot be made directly into an index.