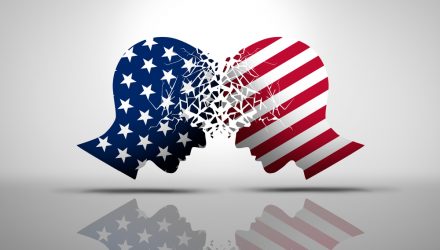 Politics Does Bleed Into the Financial Markets

Following perhaps the most animated presidential election on record, investors can be forgiven if they’d like a break from politics.

The problem is that it’s hard to get that respite while remaining actively engaged in financial markets. Compounding that problem is that politicians often care more about their job security than they do S&P 500 price action.

Put it all together and investors are still having to contend with goings on in the nation’s capital. Many don’t like what they see.

“The end of the last election cycle has done little to lower political partisanship or ease tensions between the two major parties,” says Nationwide’s Mark Hackett. “Pew Research data shows that the unfavorable opinion of Republicans by Democrats, and vice versa, is at historic highs. Party affiliation has long impacted people’s views of and confidence in the economy, though the increased polarization has driven this to extremes over the last three administrations.”

Adding to the impact politicians can have on the economy and markets is how their followers view macro events. Said another way, if an investor or consumer voted for the party in the White House and in the majority in Congress, he or she is likely to think the economy is doing well. Voters that backed the losing horse tend to be less upbeat.

As Nationwide’s Hackett points out, that scenario is alive and well today with consumer confidence among Democrats checking in at a stellar reading of 99. Republicans come in at 64. Gaps like that can influence investment decisions, and that’s not a positive.

“Neither partisan opinion can be correct. Reality is never as good as it feels when you’re winning, and it’s never as bad when you are losing. But political sentiment can impact investment decisions, which always leads to mistakes. Trading on emotion is rarely wise, but trading on political emotion is potentially catastrophic,” concludes Hackett.