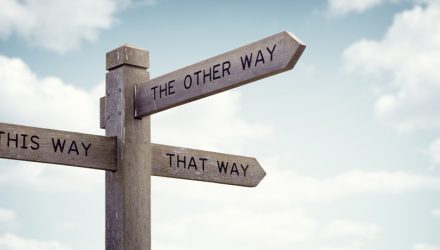 The year somewhat started in a state of general confusion, with the bond market being different from the stock market, which, in turn, was different from the economy. Looking at things now, there’s still confusion out there. ETF Trends recently spoke with Mark Hackett, Chief of Investment Research at Nationwide, about the consistently confused nature of the market, which has recently now brought in commodities and the foreign exchange markets to show further the different stories being told.

Looking at nearly an all-time high in the equity market, and all-time lows in the bond market towards yields, the explosion in gold is signaling a series of events that very rarely happen simultaneously. That sudden gold rush, fitted with the explosive lowering of the dollar, is very symbolic of the stressed, more inflationary environment.

“I think the general theme that we’re seeing is confusion,” Hackett states. “Equity investors are operating with very much of a ‘glass half full’ approach. Bond investors are in a very pragmatic, ‘wait and see’ approach. And then the FX world is looking at a ‘rest of world’ that looks better than the U.S. in terms of the economic prospects, but also shows potential for inflation.”

Were inflation to occur, the question then becomes why the FX and gold market are looking for inflation at the same time that equity investors are seemingly totally enthusiastic about increased fiscal monetary policy. For Hackett, the only thing that makes sense, in this regard, is the consistent confusion, as stated, as well as playing well for the Nationwide Risk-Managed Income ETF (NUSI).

Looking at a bond market with record low yields, a place traditionally good for hiding, and gather some yield, the investors there are now hiding in the gold market. This has allowed the general commodities market a betting hiding spot, at least for now.

Hackett adds, “The people that would traditionally be allocating to bonds, because yields are at record lows, are perhaps saying, ‘Hey, there’s really not much risk.’ Normally, you’d be giving up that yield to allocate to gold. But really, the opportunity cost is much lower. So, I think that’s perhaps what’s driving some of these gold plays.”

Addressing whether or not this is a smart play, Hackett notes how it doesn’t hurt to have a hedge, just in case everyone is wrong. With the opportunity cost at their lowest, the risk/reward is higher than many may have considered, which, again, is another reason why NUSI is in such a good position at the moment.

“NUSI is a great way to get yield in a non-traditional sense, where you do not necessarily have to go to the traditional well,” Hackett states. “It’s a little bit more of a creative solution, and because there’s so much uncertainty, having a diversity makes sense.”