Have you ever hesitated to tell the truth because you KNEW it would make someone angry? That was me in early May when I made a controversial call.

Coronavirus was spreading like wildfire, the economy was on lockdown, and millions had lost their jobs. And I was urging folks to BUY STOCKS. Specifically, I wrote a whole essay arguing the “corona crash” was overblown. And that certain stocks were coiled to jump 100%, 200%, 300%, or more in short order, in spite of the horrible headlines.

I get why folks were disgusted at the thought of buying stocks. We had just witnessed a 30% plunge in the S&P. And it felt like the world was falling apart, especially if you watch too much cable TV.

Since then the S&P 500 has gained 8%. Not bad. But it’s the gains in specific individual stocks I want to draw your attention to today.

In that same time, 3 stocks we recommended to our premium readers at RiskHedge have achieved 96%+ gains. A fourth has already surged 209%. And a fifth handed our readers 398% profits in only three months. Together, the gains from these five stocks add up to 974%.

I’m not telling you this to brag, but because the market forces that led to these gains are just now kicking into high gear.

In other words: even bigger profits are on the table if you own the right stocks this summer. In today’s essay, I’ll show you where stocks are likely headed from here, and what to do about it.

Believe It or Not, Most Investors Still Hate Stocks Today

That might seem hard to believe after the big rally US markets have staged off their March bottom. But the data doesn’t lie. According to the most recent survey by the American Association of Individual Investors (AAII), just 24% of investors are bullish.

In other words, less than one-quarter of investors believe US stocks will rise over the next six months. That’s well below the historic average of 38%.

Not only that, 48% of investors surveyed said they’re bearish. They believe US stocks will fall between now and September. That’s well above the historic average of 31%. In short, the average American hates stocks today. Stock market “sentiment” is in the toilet.

Many of These Pessimistic Investors Are “Hiding” in Cash…

The stunning chart below says it all. According to Fidelity, 18% of all investors sold ALL their stocks between February and May.

And nearly one-third of investors over the age of 65 sold ALL their stocks. That’s an unprecedented amount of selling to happen all at once. 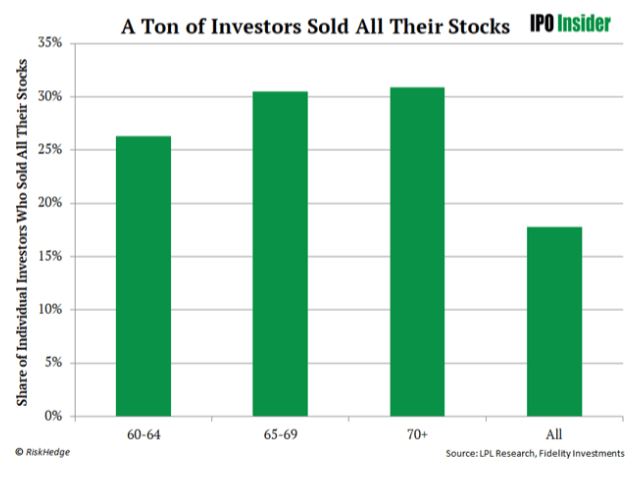 Most of This Cash Is Still Sitting on the Sidelines

According to Thomas Lee of Fundstrat—one of the few analysts I follow closely—$8 trillion in cash is “sitting on the sidelines” right now. To put that in perspective, the whole US stock market is worth around $30 trillion. So, we’re talking about a colossal sum of money, most of which will eventually find its way back into stocks.

That alone could fuel a new bull market for years to come. Of course, I get why many investors feel overwhelmingly pessimistic. Coronavirus is worsening in the south. Protests have broken out across the country. Plus, there’s a presidential election right around the corner. There’s a ton of uncertainty in the air.

But never forget this: Bull markets are born during periods of extreme uncertainty and pessimism. The last US bull market in stocks began in March 2009, when the US economy was in shambles. GDP had shrunk more than 8%. Unemployment was running at an alarming 8.3%, and continued to get worse until October of that year.

Had you waited for the “news” to turn around to buy stocks, you would’ve been years late. In other words, history shows that when folks are scared and pessimistic, like today, you should favor buying stocks, not selling them.

It’s no secret coronavirus has wrecked highly visible industries like airlines, hotels, and restaurants. The mainstream news goes on and on about the very real problems facing these sectors.

But here’s the thing: If you rely on mainstream TV news to interpret current events for you, you’re always going to hear a lot more about the bad stuff happening in the world than the good stuff.

When’s the last time you felt good after watching the news? What you DON’T hear on the news is this: Dozens of disruptive businesses are handing out massive wealth in the stock market as you read this. The profits our premium subscribers are sitting on are cold, hard proof: 398%, 209%, 171%, 100%, 96%, and 68%.

For the reasons I’ve laid out, I think stocks are headed higher this year. The performance of the S&P 500 will come down to a tug of war between winning stocks and losing stocks, as always. But if you’re in the right stocks, it doesn’t matter what the S&P 500 does.