You are at:Home»Retirement Income Channel»Municipal Bond ETFs Are On the Up 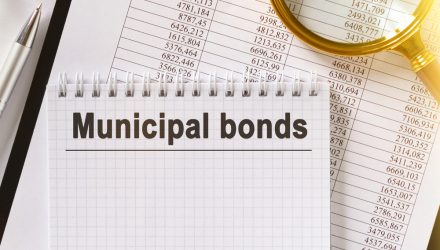 Municipal Bond ETFs Are On the Up

Fortunately, those yields are steadying and the iShares National Muni Bond ETF (NYSEArca: MUB) is getting its groove back. MUB, the largest municipal bond exchange traded fund by assets, is higher by almost 1% over the past month. In muni bond terms, that’s good work in such a short time frame.

“Municipals posted a third consecutive month of positive performance in May amid a backdrop of rangebound interest rates and favorable supply-demand dynamics,” according to BlackRock research.

The $22.3 billion MUB holds 4,825 bonds and sports a 30-day SEC yield of 0.84%. An effective duration of 6.14 years puts the ETF in intermediate-term territory. That yield doesn’t jump off the screen, but it’s a testament to MUB’s high quality. Plus, the fund may offer some duration advantages as investors depart short-term munis.

Municipal debt issued by New York and California combine for over 42% of MUB’s portfolio. Those were among the states believed to be facing fiscal woes at the height of the coronavirus pandemic, but that tide is turning. For example, in California, the largest state by population, tax collection is soaring.

Firmer state and local finances diminish the chances of debt downgrades, which would adversely affect related munis and diminish the case for funds like MUB. As it stands today, credit risk is limited with MUB as over 91% of the ETF’s roster is rated AAA, AA, or A. Overall, muni fundamentals appear sturdy.

“Amid a backdrop of already solid fundamentals, we anticipate that the market will benefit from continued robust demand for tax shelter and a large net negative supply environment in which reinvestment income (calls, coupons and maturities) outpaces issuance,” concludes BlackRock.