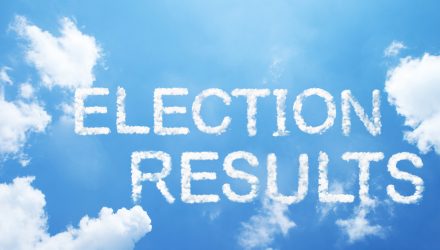 Among fixed income assets, municipal bonds are often sensitive to political conjecture due to the tax treatment of these bonds, bu the  VanEck Vectors High-Yield Municipal ETF (CBOE: HYD) could be a solid bet for income investors regardless of what happens on Election Day.

Citigroup says if municipal bonds decline following the upcoming election, that pullback could be a buying opportunity.

“The advice echoes the bullish call the bank’s analysts made in March when they suggested investors swoop in as a panic about the coronavirus sent the $3.9 trillion market into its biggest crash on record,” reports William Selway for Bloomberg. “That proved prescient: prices rallied back, delivering big gains after Congress enacted the $2.2 trillion economic stimulus measure and the Federal Reserve moved to ensure the market wouldn’t be rattled by another liquidity crisis.”

“Municipal underperformance, if any, should be short-lived, and we would view it as a buying opportunity in light of our longer-term bullish outlook,” according to Citigroup analysts.

HYD seeks to replicate as closely as possible, before fees and expenses, the price and yield performance of the Bloomberg Barclays Municipal Custom High Yield Composite Index, which is intended to track the overall performance of the U.S. dollar-denominated high yield long-term tax-exempt bond market. HYD is expected to pay monthly dividends.

According to Bloomberg: “If Joe Biden defeats President Donald Trump and Democrats win control of the Senate, Congress will likely extend a large amount of aid to states reeling from the recession and raise federal tax rates on the highest earners, which would increase the value of owning tax-exempt debt. Yet even if Trump wins a second term and Republicans hold the Senate, that could also boost demand: without a big aid package, states and cities will have to raise taxes to cover the massive budget shortfalls they face — which would also increase the value of tax-exempt securities, Citigroup’s analysts said.”