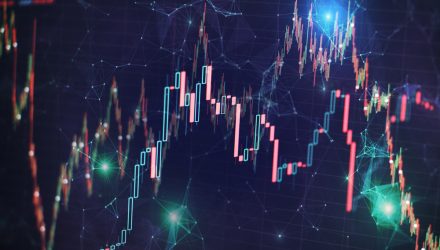 In a market environment marked in part by retail investors pining for meme stocks and exhilarating cryptocurrencies, it’s important to consider just how much euphoria is currently baked into asset prices.

Indeed, some of the blush has come off the euphoria trade, as highlighted by Bitcoin’s recent slide and the plunging prices of non-fungible tokens.

“It has been a tough run for the euphoria trade of late. Bitcoin was off by more than 50 percent from its mid-April high at one point over the weekend, with many other cryptocurrencies following suit, while NFT sales volumes have similarly plunged from their peak in early March,” notes Nationwide Economics.

Few investors monitor Bitcoin price gyrations and considerably fewer actively stay abreast of illiquid, niche markets such as collectibles and NFTs. However, there are lessons to be learned from rapid evaporation of enthusiasm in those segments, including euphoria’s reputation for giving way to upticks in volatility.

“Choppiness is to be expected after the big runs of the past year, however, especially in the more fledgling asset classes,” adds Nationwide. “Volatility has tended to pick up after outsized moves even in the relatively staid equity market and not always in conjunction with a reversal of those changes. In fact, the S&P 500 has historically been much more likely to build on annual increases of at least 20 percent than to retrace some of those gains in the subsequent year.”

Interestingly, investors aren’t yet betting on an increase in volatility. At least not by way of low volatility exchange traded funds – a popular refuge for market participants looking to maintain equity exposure while riding out turbulent stretches. For the week ending May 28, three well-known low volatility ETFs suffered about $3 billion in combined outflows.

For investors concerned that a volatility-induced haircut for asset prices is on the way, history provides some good news. Market run-ups fueled by too much ebullience tend to give way to declines. Those retrenchments also prove to be viable buying opportunities.

“The S&P 500 fell into corrections in 1997, 1998, and 1999, but snapped back quickly in each case (it takes nine months on average for the S&P to completely retrace its correction declines, but the index was back at new highs in those three episodes in just two months, four months, and four months, respectively),” according to Nationwide.

Of course, there are no guarantees that broader benchmarks are on the cusp of big declines, but if that scenario comes to pass, it’s worth remembering that history tends to repeat itself, in some form or fashion.