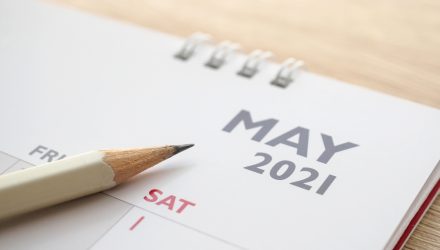 Is Sell in May in Play This Year?

May is here, and with the arrival of the fifth month of the year come jitters about the old “sell in May and go away” saying.

Indeed, May marks the arrival of what’s been a historically weaker six-month period for equities.

“’Sell in May and go away,’ is popular because the May-to-October period is historically the weakest six-month stretch of the year, though May has been positive in seven of the last eight years. Given that the 30% return over the past six months has been among the strongest on record, a pause in the rally would not be unexpected or unhealthy,” says Nationwide’s Mark Hackett.

While the arrival of May doesn’t mean investors should dump equities entirely, there have been signs that some pruning and prudence could be advisable.

“The rally in equity markets stalled following the impressive rally to record highs, with the S&P 500® Index roughly unchanged over the past two weeks,” adds Hackett. “The total movement over the past two weeks is the tightest since 2016. Many of the factors driving markets remain in place, including vaccine optimism, the economic reopening, and accelerating earnings, though inflation and valuation concerns remain. Stalling momentum is reflected in sentiment indicators, including Global Fear & Greed, AAII Sentiment Survey and CNN Fear & Greed well off the peak levels from mid-April.”

Interestingly, May itself usually isn’t a bad month for stocks. Over the past two decades, the S&P 500 has averaged a May gain of 0.40%. However, defensive sectors often shine during the summer months, particularly as market action turns sluggish.

It remains to be seen, but there are several reasons that 2021 could be different for equities in May.

“The supply and demand for shares in the equity market is shifting, with a slowdown in SPAC issuance and a rebound in share repurchases,” concludes Hackett. “First quarter buyback announcements of $339 billion is 68% higher than a year ago and the largest number in nearly two years. IPO activity remains robust, but that has been overwhelmed by record flows into equity funds. Households increased their equity holdings to 41% of total financial assets, the largest percentage on record dating back to 1952. The TINA (there is no alternative) principal still applies, however, with interest rates historically low and investment-grade credit spreads at the tightest level since 1997.”