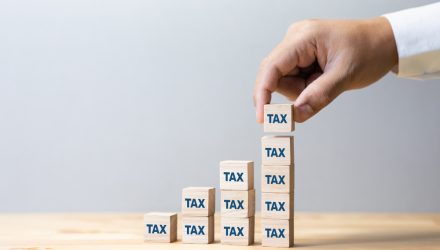 However, President Biden is proposing the largest tax increases the U.S. has seen in three decades – one aimed at the wealthy and one that, if passed, would result in substantial increases to capital gains levies.

“While debates around the $4.1 trillion infrastructure and social programs continue, recent attention is focusing on how to fund this spending,” says Nationwide’s Mark Hackett. “The Biden Administration is considering several revenue-raising options such as higher corporate taxes, a minimum corporate tax and increased collection of taxes owed. Higher taxes on wealthy individuals is also in the mix, including potentially raising the maximum capital gains tax from the current 20% to 39.6% on individuals with incomes over $1 million.”

Political proposals are just that – proposals – and there are no guarantees that pitches make it to the presidents’ desk. Yet data confirm there are jitters regarding a possible tax hike.

“A survey by Nationwide Retirement Institute of advisors and financial professionals between March and May this year indicates a high level of concern about tax policy,” notes Hackett. “Of the 200 respondents, 32% noted that taxes are the most important macro issue impacting client portfolios. Other concerns (e.g., the federal deficit, the pandemic, government gridlock, inflation) pale in comparison.”

While tax chatter could compel investors to move out of mutual funds and into more tax-efficient exchange traded funds, the good news is that history confirms there aren’t tight correlations between equities and changes in tax policy.

“In an analysis by the Tax Foundation, there have been 22 changes to the maximum capital gains tax rate since 1954,” says Hackett. “In those years when capital gains tax rates changed, the correlation with stock gains was almost indiscernible at 0.004. If the Biden Administration wants to get sizable infrastructure and social spending packages through Congress, it will likely include raising taxes. But making emotional decisions in portfolios based on tax changes may harm long-term returns.”