You are at:Home»Retirement Income Channel»Investing in the Climate-Conscious Green Bond Market 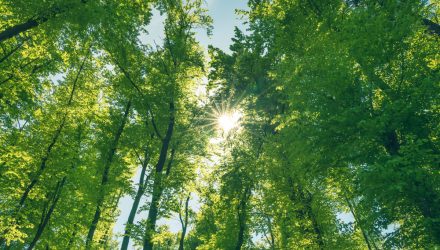 GRNB, which turned four years old in March, is the original exchange traded fund dedicated to green bonds – an asset class of sovereign and corporate debt issuers bring to market in order to raise capital for environmentally friendly projects. For example, if ABC Corp. sells $500 million in bonds to make its corporate campus carbon neutral or powered by solar energy, those bonds could be classified as green.

Relative to more traditional corners of the bond market, green bonds are still a small slice of the pie. However, that’s changing, as green bond issuance surged in the first quarter.

“The world issued $106.86 billion of green bonds in the three months ended March 31, the strongest quarter on record, according to UK nonprofit Climate Bonds Initiative, which tracks and promotes green investment. More than half of the volume came from five countries: the U.S., France, China, Germany and Italy,” reports S&P Global Market Intelligence.

With ‘GRNB’, Geography Is Meaningful

As the paragraph above implies, green bonds are a global asset class, meaning GRNB’s geographic exposures are relevant to investors. While the U.S. is a force in this market, Europe, in particular, rapidly warmed to green bond issuance.

Excluding supra-national bonds, GRNB features exposure to seven European countries led by a 4.59% allocation to the Netherlands – one of the most climate-progressive countries in the world. Germany and France, the Eurozone’s two largest economies and nearly 5% of GRNB’s roster, are also major green debt issuers.

“Other regions are also contributing to the global issuance growth, with the Biden administration pushing a green agenda and Asian countries such as China, Japan and South Korea’s recent pledge to go carbon neutral over the next several decades. Analysts expect these moves will help grow a strong base of investors for decarbonizing projects that need funding,” according to S&P.

Green bond issuance is expected to top last year’s record of $312.7 billion. That could be a boon for GRNB, which yields 1.74%. GRNB is appropriate for conservative climate-conscious fixed income investors as well because 76.53% of the fund’s 265 holdings carry investment-grade ratings.