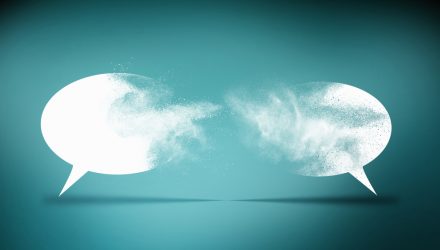 There are two certainties regarding inflation in 2021. First, there’s no denying that the Consumer Price Index (CPI) is on a steady climb higher.

Second, it also remains clear that the persistent vs. transitory debate rages on, though the longer that’s the case, the more those in the persistent camp may feel vindicated. Another obvious factor in the inflation situation is the supply chain.

“It’s a simple law of economics: prices rise when supply cannot meet demand. This year’s post-lockdown re-openings led to a surge in demand, which suppliers have had trouble meeting,” says Jeffrey Kleintop of Charles Schwab. “Although demand can snap back quickly, supply often takes time to get back up to speed. Bottlenecks at ports have contributed to the shortages. The resurgence of port traffic in August and September led to unprecedented logjams and delays.”

Crimped supply chains are likely to be mentioned on upcoming third-quarter earnings conference calls, and there could easily be impacts from those results. However, a light at the end of the tunnel could be emerging.

“While supply shortages pose a risk to third quarter earnings reports which begin this week, they may finally begin to ease now that we are past the seasonal peak in shipping demand. The number of ships waiting at anchor to unload at the U.S.’s busiest ports (Los Angeles and Long Beach) appears to have peaked on September 19, according to data from the Marine Exchange of Southern California,” adds Kleintop.

Investors concerned about persistent inflation should monitor wage growth. There’s already evidence that employers are paying up to fill a variety of roles, and the faster wages accelerate, the more fuel there is for the persistent argument. Add to that, labor strikes could create more inflation, and that’s another scenario to monitor.

“In the first week of October, U.S. strikes included nurses in Massachusetts; steelworkers in West Virginia; school bus drivers in Maryland; service workers in Colorado and workers at Kellogg plants in Nebraska, Michigan, Pennsylvania, and Tennessee. The big headline looming is a potential Hollywood strike of nearly 60,000 film and television crews. Every local newspaper in America is covering a seemingly widening rash of strikes,” according to Kleintop.